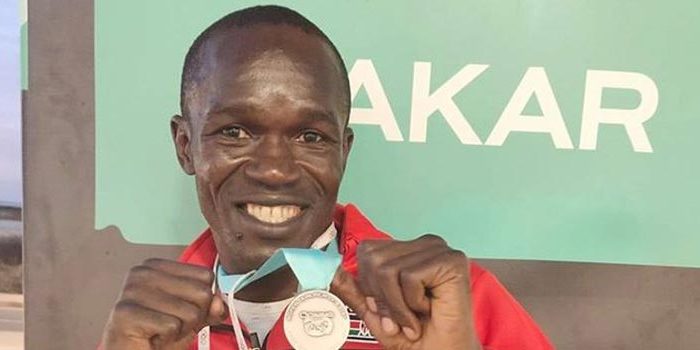 The late Wangila remains the only Kenyan boxer to win an Olympic gold medal when he punched his way to the top of the podium at the 1988 Summer Games in Seoul, South Korea in the welterweight division.

And now, Okoth who earned a slot at the Olympics after winning silver at the African qualifiers in Senegal hopes to follow in Wangila’s footsteps and clinch Gold when the Tokyo Games are finally staged, probably next summer.

“My target at the Olympics is only gold. If I wanted a bronze or anything else, I wouldn’t even take that journey to Tokyo. Getting that gold, we will let Wangila rest in peace for real. Every other Olympic we are talking about Wangila’s gold and sometimes it is like we are disturbing him. My target is to make people talk about my gold,” the featherweight division hard hitter stated.

Okoth says he has already started looking at videos of possible opponents in his featherweight category and his confidence is already building towards the games.

“Technology has made things easier for us because we can get videos and analyse with coaches. Also, we can get our own videos and look at where we went wrong and try correct. I am optimistic that I will be ready.” The confident Okoth notes.

Despite his ambitions, Okoth, nicknamed commander because of his second career as a member of Kenya’s Defense Forces has admitted it has been hard training especially due to the effects of the Coronavirus.

“At the moment it has been tough because we can’t go to the gym as much as we would want to do. There are so many things that we can’t do but it is the situation we find ourselves in and we have to adapt,” Okoth noted.

His coach Musa Benjamin has admitted as much, saying the athletes have been forced to look at alternative ways of keeping fit at this time when all sporting facilities have been shut down to avert the possible spread of the virus.

“It has affected everything. We are avoiding any kind of gathering and that includes going to the gym. We are looking at ways where we could have very few boxers in the gym. The two (Nick and Christine Ongare) have been on active rest but we need to start our programs. Apart from that we are also giving them programs to do at home,” the coach stated.

Also set to get into training are boxers who will be eyeing a second chance at qualification with the world qualifiers which as at now are on hold due to COVID-19.

“We are looking at the boxers we took to the African qualifiers and the technical bench will have an assessment of who we think has a good chance at the World Qualifiers before we settle on a list. We wait to see when they will be scheduled,” said Duncan Kuria, the Boxing Federation of Kenya Public Relations Officer.

Meanwhile, Okoth and Musa have continued urging Kenyans to respect government directives in a bid to combat the spread of the virus.

“We just have to ensure we wash our hands always or use sanitizers. You never know where you can pick the virus from and when you go home with it, you infect your whole family. We need to follow all the directives,” Okth stated.

His coach Musa added; “This virus is a serious threat to humanity. Let us keep our guard high and protect ourselves.”