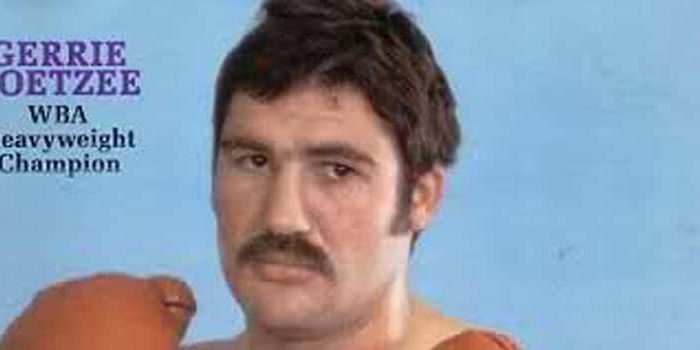 Boxing fans in America and South Africa have warmed to the news that ‘Gerrie’, a film dedicated to the trailblazing achievements of Africa’s first world heavyweight boxing champion, Gerrie Coetzee, will hit the silver screens at the end of the year in Johannesburg and Washington DC.

David ‘Skip’ Hartquist, an American movie producer, said after the announcement was made three months ago there has been a heightened sense of anticipation as Coetzee has always been revered among US boxing fans.

“Our initial research showed that Coetzee was popular in America and that was confirmed when he was honoured by the Hollywood and African Prestigious Awards (HAPAwards) in Los Angeles in November 2017.

“The HAPAwards recognise outstanding American and African individuals whose lives have been marked by extraordinary accomplishments.

“His Hollywood accolade brought back memories of that extraordinary night in September 1983, when as a rank underdog he annexed the world heavyweight title by knocking out the hitherto undefeated Michael Dokes at the Richfield Coliseum, Ohio.

“Our media releases have enjoyed saturation coverage in South Africa and that has amped up interest in the movie.”

After the Dokes conquest, Coetzee fought several times in America at famous venues such as the Hollywood Palladium and the Arco Arena, Sacramento.

Coetzee’s daughter Lana was born in Cleveland, a day after he became world champion.

Hartquist said Coetzee was greatly admired because as a white South African he threw the law book out of the window during the era of apartheid.

He adopted a black child and he employed an Indian businessman as his media spokesperson in the mid-1980s, prompting consternation among the country’s white lawmakers.

“Coetzee opposed racial separation, he was a unifier. The movie will perfectly capture the drama of the event and with the material that we’ve already obtained suggests it has the hallmarks of a great boxing film. It will be a fitting tribute to Coetzee’s athletic achievements, his humility, his moral courage and simply being a great guy.

“He had the distinction of becoming the first African heavyweight champion of the world.  All these events are meaningful to American audiences.

“I recently heard a heart-warming story about Coetzee driving a car in New Jersey and was pulled over by a policeman. When Coetzee presented his credentials, the cop recognised who he was, and asked for his autograph instead,” said Hartquist.

While Coetzee may not have endeared himself to the apartheid regime, he had a fan in Nelson Mandela, South Africa’s most famous anti-apartheid revolutionary and political leader, who became the first president of a democratic South Africa.

During his 27-year imprisonment (1962-1989), Mandela had on occasions listened to Coetzee’s fights on the radio.

After his release, Mandela requested that Coetzee visit him, and a meeting was arranged at the Carlton Hotel in Johannesburg.

Mandela also presented him with a medal. There are pictures on the internet showing Mandela, himself a former amateur boxer, and Coetzee striking a boxing pose.

Filming in Johannesburg will start in mid-April with South African director Koos Roets at the helm.