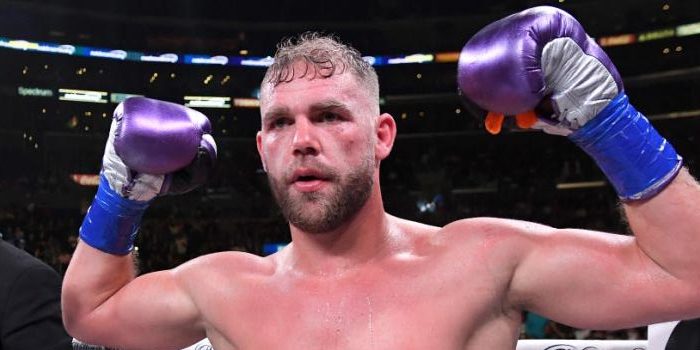 WBO super-middleweight champion Billy Joe Saunders saw his license suspended by British authorities on Monday after filming a video in which he gave men a detailed explanation on how to strike their wife or significant other while self-isolating due to coronavirus.

The video, posted to Saunders’ social media, has since been deleted.

In the video, Saunders stands by a heavy bag and says the following to the audience while occasionally throwing a punch.

Your old woman is giving you a little bit of mouth, and you try to be patient, you try to be calm, cool. But on the seventh day, or sixth day should I say, you’re just about to explode. All of a sudden, she’s coming at you, spitting a bit of venom in your face, ready to say you … left the dishes out. I don’t know what you’ve done, but you’ve upset her.

At this time, she may flash and see what you’re thinking. ‘Wash it up, has he done it, I can’t believe this. Whoa, what’s happened?’ She don’t know what’s happened. She’s in a state of horror at the minute. She don’t know what’s going on. That flash is coming. And all of a sudden, you just get down on that knee and spring up, so you finish her off. BAM! That should do the trick.

The British Boxing Board of Control was unamused by the video from Saunders. The organization reacted by suspending Saunders indefinitely:

The British Boxing Board of Control having considered comments made by Billy Joe Saunders on social media have suspended his boxer’s licence pending a hearing under the Board’s misconduct regulation, at a time and venue to be confirmed as soon as possible.

Saunders also issued an apology for the video, claiming it was a “very, very, very bad out of taste joke.”

Saunders also tweeted immediately after the video start circulating that he “would never condone domestic violence,” despite having posted a video that clearly — humorously or not — condoned domestic violence.

Billy Joe Saunders has been in trouble before

This isn’t the first time a “joke” landed Saunders in hot water.

The boxer previously faced punishment in 2018 for videoing himself offering a homeless woman crack if she would perform a sex act or assault a bystander.

Saunders also drew ire after an audio clip circulated last week in which he could be heard laughing about getting three boxers thrown off a plane by calling the airline and saying his friend had coronavirus-like symptoms.

Saunders later tweeted he had been seriously concerned about his friend and not making a prank call, despite audible giggles in his retelling of the story.

Saunders was most recently seen in the ring defending his title against Marcelo Esteban Coceres in the main card of the rematch between YouTubers KSI and Logan Paul. However, Saunders’ suspension could put his next fight — which could be the payday of Saunders’ life — into potential doubt.

What does this mean for Saunders’ fight vs. Canelo Alvarez?

Saunders was previously scheduled to face superstar Canelo Alvarez in May, but that fight was postponed earlier this month due to the coronavirus pandemic. Per ESPN, the fight has been signed but not formally announced.

If Saunders isn’t reinstated by the time the match can be rescheduled, it seems possible Alvarez could seek a different opponent. Perhaps one that doesn’t record domestic violence how-tos, offers of crack for sex or retellings of coronavirus prank calls.