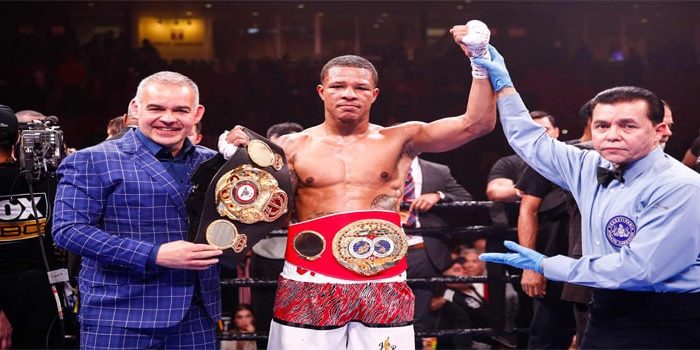 “As soon as I stepped into the ring, I knew he could not hurt me,” said Rosario. “I knew that my power was affecting him right away. This is a big victory for me and for the whole Dominican Republic.”

“Rosario was the better man tonight,” said Williams. “It was a great homecoming for my fans and I’m sorry I let them down. What went wrong tonight needs to and will be fixed. We’re going to an immediate rematch and we look forward to returning the favor.”

In his first world title fight, the Dominican Republic’s Rosario landed power punches from the outset and opened up a cut on with a punch over Williams’ right eye in the second round. Williams was landing power punches of his own, but was unable to stop Rosario from coming forward.

“I’m so emotional in this moment right now,” said Rosario. “When I lost my last fight I said I will never lose again until I become champion of the world and that’s what happened tonight. I came prepared. I knew before the fight that I was going to win it.”

In round five Rosario landed the punches that would ultimately lead to the end of the fight, hitting him with hard straight right hands that immediately slowed Williams.

“I have to give a lot of credit to my team,” said Rosario. “I had a 16-week training camp and that prepared me for this. My life is changed forever and I can support my family in a whole new way. I realized that I was going to win, once I was offered the fight. I knew that if I made the sacrifice, that I would do what I did tonight. I knew it 16 weeks ago.”

Rosario sensed his moment and came forward with big punches, while Williams tried to hold and survive. Eventually the onslaught proved to be too much, and referee Benjy Esteves halted the bout 1:37 into the round. At the time of the stoppage, Rosario led 39-37 on two cards, with the third card scored 38-38.

“I wasn’t surprised he was so good,” said Williams. “I told everybody he’s a real fighter. I have to accept it. The cut blurred my vision a little bit but it wasn’t the reason why I lost. He was the better fighter tonight. We’ve got a rematch clause. I’ll see him again soon. I’ll be back.”

“He is a great fighter,” said Colbert. “People don’t realize that, because he had a bad decision against Ladarius Miller. But he’s a great fighter. He’s very awkward. He’s slick and fast. It was hard to catch him because he was running, but he came to fight. I take my hat off to him.”

The action began tactically, with Colbert trying to figure out the awkward style of the veteran former champion Corrales. Colbert switched from orthodox to southpaw and was able to control the early action despite a slow pace.

“I did my job in there,” said Corrales. “My strategy was to hit and not get hit. I felt like I made him struggle for a lot of the fight. The knockdown wasn’t from being hurt, it was my balance. Our feet got tangled and I lost my balance. I came in here to win. We both did our jobs, but the judges scored his pushing more than his punching.”

Colbert continued to vary up his attack as the fight went on, while Corrales was able to have some success in the middle rounds landing straight lefts to counter his attacking opponent. In round 10 Colbert began to pull away, landing a clean left hook followed by a right hook to the top of the head that put Corrales on a knee.

“I had confidence coming into the fight,” said Colbert. “I knew I was going to dominate the fight and I told you all that before the fight happened. He was running and I was trying to catch him, so I told my corner, let’s have a dog fight. We got 12 rounds. I’m in shape. You see, I didn’t sit down one round. I’m in shape and I came to fight. I wasn’t going to leave without this title.

The 23-year-old from Brooklyn seemed to get stronger as the fight went on and finished the championship rounds impressively, staggering Corrales in the waning moments of the fight to punctuate the performance. Colbert was the victor on all three judges’ cards, by scores of 117-110 twice and 116-111.

“The strategy was to use my jab like I did and try to set up my punches,” said Colbert. “But he’s very awkward and has good distance. Slowly but surely I decided to stop boxing, close the distance and get on him. I knew he couldn’t out throw me, I’m from Brooklyn.”

Fighting from the southpaw stance, Spring looked to land big overhand lefts but was rarely able to catch up to the speedy 19-year-old Spencer. Spencer dominated the action with his speed and by landing big hooks throughout the action.

“I was in there with a cagey, long southpaw,” said Spencer. “To be honest, when a guy is fighting as cagey as he was, it’s really hard for a guy with my style to just pull something out of nothing. He was a real defensive guy.”

Spencer was especially effective sneaking a powerful left hook around Spring’s guard. Spring tried to press the action in the later rounds and force a firefight but Spencer remained patient and picked his spots. Late in round six, a left hook from Spencer sent Spring flying into the ropes, before he was saved from the follow up onslaught by the bell.

“At the end I really just pressed him, said I’m going to finish strong, and hit him with some good shots,” said Spencer. “If I had done that in the first or second round, I would have ended it early. I’m glad to get the six rounds in. Experience is everything. You’re only as good as your next fight. I’m happy to get in there and get some good experience and I did my thing and got the shutout.”

“I was waiting too much,” said Spring. “I thought he would come in and engage more and I was looking counter him but he stayed on the outside. I was more impressed by his speed then his power. He’s a talented fighter but I could have been more effective.”

After six rounds, all three judges saw the fight for Spencer, by the score of 60-54 three times. PBC’s 2019 Prospect of the Year, Spencer will look for another big year in 2020.

“I’m going to stay busy this year,” said Spencer. “I’m going to have a four-fight year. This is one of four. We’re looking to bring some excitement and have some fun.”