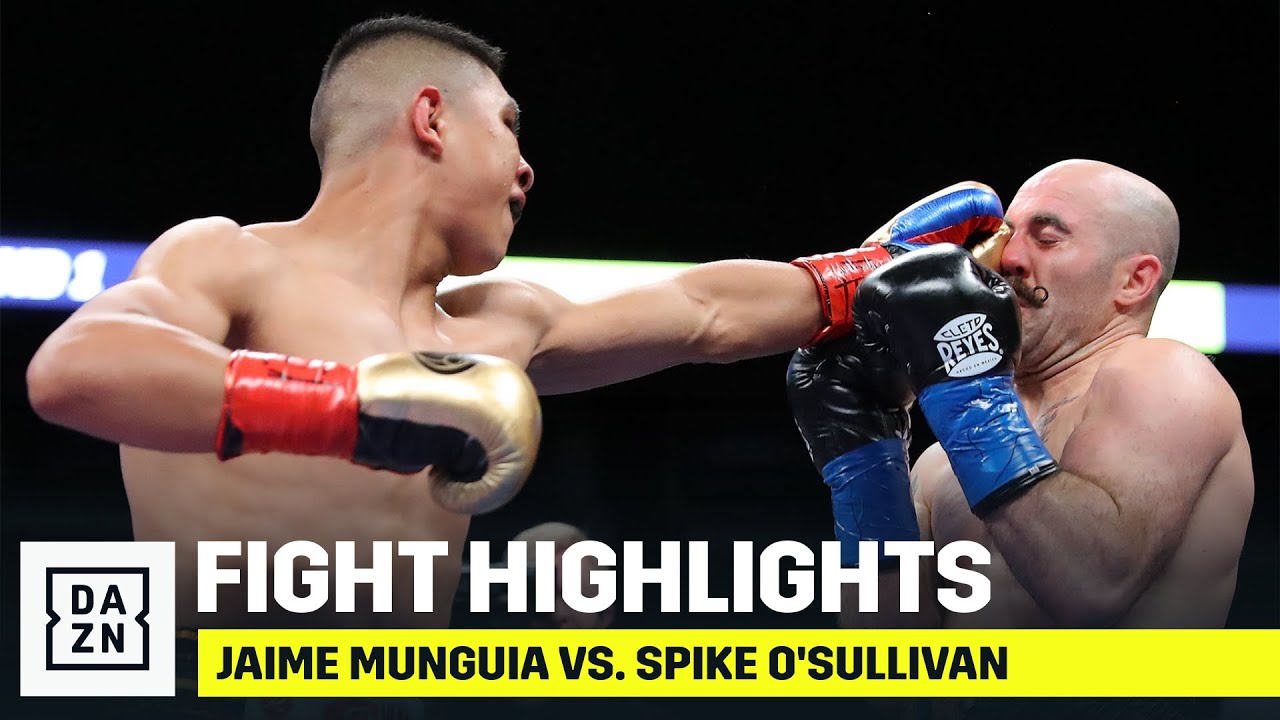 The first fight at a new weight went entirely as expected for the former 154-pound titlist, who had his way with Ireland’s Gary ‘Spike’ O’Sullivan en route to an 11th round stoppage Saturday evening at The Alamodome in San Antonio, Texas.

An accumulation of power shots forced O’Sullivan to the canvas, prompting his corner to literally throw in the towel in forcing referee Mark Calo-Oy to stop the contest at 2:17 of round eleven.

“I really felt the difference at 160 pounds,” admitted Munguia, who weighed a career-heaviest—though well-proportioned—159 1/4 pounds. “I felt so much stronger than I have at 154 pounds.”

Munguia looked filled out in his first fight which didn’t require boiling down to a weight unbefitting his 23-year old, 6’0” frame. The effects were evident in his power shots, enjoying a strong opening round which he capped with a series of right hands and a left hook which had O’Sullivan slowly walking back to his corner after the bell.

The same pattern held true in round two, with Munguia gaining more confidence in his power although O’Sullivan showed a chin far better than advertised. The Irish middleweight had drawn unfair flak for a 1st round knockout to David Lemieux more than two years ago, a fight where he simply got caught by the former middleweight titlist.

O’Sullivan rode out the early storm, including a 3rd round exchange which saw Munguia land several power shots only to get caught late with a right hand which left him briefly buzzed. The insistence on his part as well as that of head trainer and Hall of Fame former four-division titlist Erik Morales was that he wasn’t hurt, although the unbeaten middleweight made a point to box far more in round four.

Action picked up in the middle rounds, seemingly tightening up on the scorecards as O’Sullivan landed several clean right hands and left hooks upstairs. Munguia showed a world class chin, barely budging and often able to dig deep to fire back.

A wild round seven saw Munguia attempt to work the body, only to lose a point for a low blow. It didn’t deter the Tijuana native from committing to a downstairs attack, before bringing it back up top with a heavy jab which were followed with left hooks and crisp right hands.

O’Sullivan continued to absorb in round eight while doing his best to fire back. The veteran contender was able to score with right hands, but fighting through fatigue in the process as Munguia wisely picked his shots and preserved his energy for the later rounds.

Munguia set traps in round nine, moving back to the ropes and drawing in O’Sullivan before driving him back with a series of jabs and straight right hands. O’Sullivan did his best to adapt, only to get clipped with an overhand right before firing back with a right and body shots as Munguia played defense.

As it turned out, he was simply reloading for the home stretch.

Munguia poured on the attack in rounds 10 and 11, as O’Sullivan was clearly running on empty. A series of right hands had O’Sullivan out on his feet, falling into the ropes but his back to the referee and managing to avoid a stoppage long enough to clinch his way out of trouble.

It merely prolonged the inevitable. Munguia went right back on the attack, landing a series of power shots in willing O’Sullivan to the canvas. It was enough to convince head trainer Packy Collins to signal for his fighter to be rescued, to which the referee obliged in stopping the contest.

A two-fight win streak comes to a close for O’Sullivan, who falls to 30-4 (21KOs). All four of his career losses have come versus world-class competition, having suffered stoppage defeats to Lemieux and Chris Eubank Jr. and a wide points loss to Billy Joe Saunders prior to Saturday evening.

Meanwhile, Munguia remains perfect as a pro and in position to make a run at becoming a two-division titlist. In vacating his 154-pound title late last year, came his placement as the number-one ranked contender to the 160-pound belt currently in possession of Demetrius ‘Boo Boo’ Andrade, who has a voluntary defense versus Ireland’s Luke Keeler later this month.

A win by Andrade could set up Munguia’s next title fight if he so chooses that route. The popular attraction is—naturally—in search of bigger game.

For now, he will take whatever he can get—and the middleweight division gladly welcomes his services as one more entertaining option has been added to the mix.