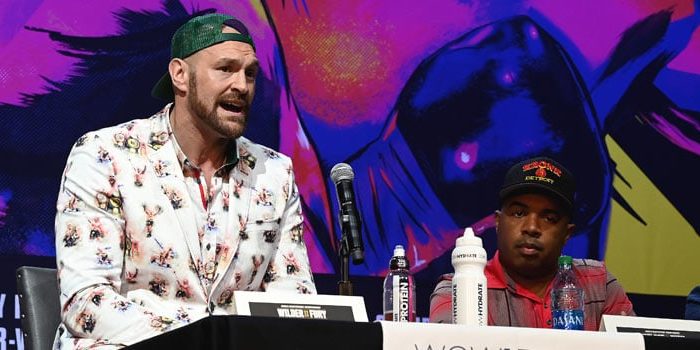 No matter your take on the outcome of the first fight, there is common ground on how the rematch will play out between Deontay Wilder and Tyson Fury.

Most experts envision only two possible scenarios for their February 22 Pay-Per-View headliner from the MGM Grand Garden Arena in Las Vegas—either Wilder lands a right hand to end it, or England’s Fury outboxes the unbeaten American to take a decision win and with it the World heavyweight championship.

Never one to ride the status quo, the brash Brit envisions an entirely different outcome.

“Everyone’s talking about I’m going to come out herking and jerking… I’m not looking for herky-jerky,” Fury (29-0-1, 20 KOs) insisted during a press conference held Monday in Los Angeles to formally announce the joint PPV venture between ESPN and Fox Sports. “I want him to meet me dead in the center of the ring. Let’s have a slugfest. Best man’s left standing, the loser goes down. I have 20 knockouts in 29 wins.

The first fight came in December 2018, three fights into Fury’s comeback after being away from the ring for more than 30 months while riding out a two-year drug suspension and battling substance abuse and mental health issues. The unbeaten heavyweight ballooned up to 400 pounds during the down time, before whipping himself back into proper health.

Fury is 4-0-1 (2 KOs) since the return, including a 12-round win over previously unbeaten Otto Wallin where the Brit had to overcome a horrific cut over his right eye. A strong second half surge led to a lopsided win, which came two months prior to Wilder (42-0-1, 41 KOs) scoring a repeat knockout of Luis Ortiz last November. A right hand ended the fight and erased a scorecard deficit, eerily similar to how Wilder was able to rally late to twice drop Fury, including an iconic 12th round knockdown which saw Fury miraculously rise from the canvas and finish the fight on his feet and dancing around as if nothing ever happened.

Nothing is precisely what he expects of his longtime rival the second time around.

“The fact of the matter is, I’m not going to dress it up, I’m going to speak the honest truth,” insists Fury. “If I’m stupid enough to get hit by that big, stupid right hand, then I deserve knocking out. And it will knock anyone out. He showed, he landed it and knocked me down twice. But it’s not how you go down, it’s how you get up and respond. He knows he’s not messing with no quitter, no shithouse. I’m a fighting man.”

If nothing else, Fury proved that both simply in his coming back from a near-suicidal state and in his aforementioned first fight with Wilder. To a lesser degree, it also surfaced in the win over Wallin where for a few rounds he was met with the threat of suffering a TKO loss due to the cut.

“The late, great Brendan Ingle once said ‘to beat Tyson Fury, you have to nail him to the f–kin’ canvas’,” claims Fury. “And that’s what this little skinny legged super noodle will have to do. He’ll have to nail me to the canvas. And if he can’t do that, I’m going to eat him up.”

Of course, the way he tells it, there won’t be a chance of the fight reaching that point.

“I’ll meet you in the center of the ring, Deontay Wilder,” promises Fury. “February 22nd, you won’t have to look anywhere for me. Just watch out for the right hand because you’re going to sleep in two rounds. Two!  Two rounds, he’s going down.

“I keep having a dream about two rounds. In poker, I keep getting dealt number two. It’s definitely a thing. He’s getting knocked out in two rounds. 100 percent!”