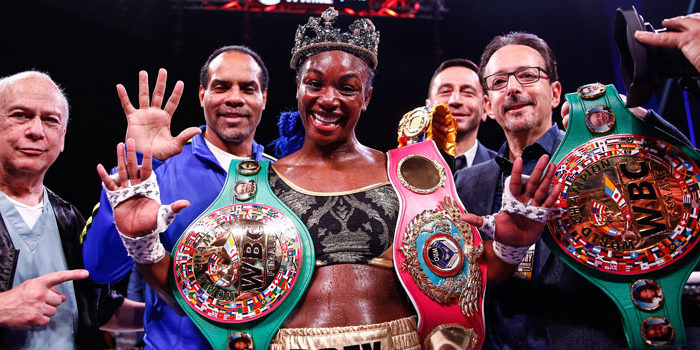 Claressa Shields made history yet again by claiming the WBC and WBO 154-pound world championships with a dominating unanimous decision over Ivana Habazin Friday on SHOWTIME from Ocean Casino Resort in Atlantic City.

Shields became the fastest fighter in history, male or female, to win world titles in three different weight divisions, surpassing the record of Vasiliy Lomachenko and Kosei Tanaka, who both accomplished the feat in 12 fights. The near-shutout was scored 99-89, 100-90, 100-89.

.@Claressashields channels Queen ? on her way to the ring. #ShieldsHabazin | @Beyonce pic.twitter.com/H9mG14PJNb

Shields (10-0, 2 KOs) overpowered Habazin from the opening bell, utilizing a strong jab and a steady diet of body shots that left the Croatian mostly in defensive mode throughout the 10-round fight.  In the sixth round, a series of body shots forced Habazin to take a knee in the first knockdown of her career.  It was also the first knockdown for the two-time Olympic Gold Medalist and undisputed middleweight world champion in her professional career.

Shields scores the first KD of her career after Habazin goes down in the 6th. #ShieldsHabazin pic.twitter.com/3UjnRFlN4H

Following the knockdown, Habazin continued forward but did so without throwing many punches.  Habazin (20-4, 7 KOs) threw just 285 compared to 516 for Shields, who also connected on 38 percent of her power shots compared to just 18 percent for Habazin.