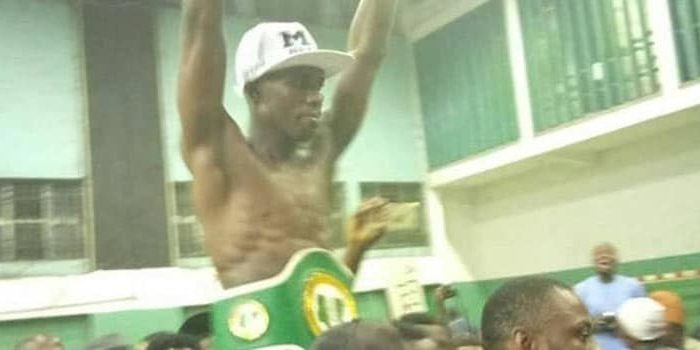 In one fell swoop, Rilwan “Real Show Boy” Lawal captured both National and West Africa super featherweight titles, knocking out the overmatched Fatai “Prince” Nurudeen in the seventh round at the Rowe Park Sports Centre in Lagos, Nigeria.

Nurudeen survived big scares in the first and fifth rounds before succumbing in the seventh.

Lawal staggered him with a solid right in the first. However, a series of follow-up shots couldn’t stop the game Nurudeen.

Nurudeen attempted to land some bombs of his own but most of his offerings were evaded by Lawal, who was both leading and countering at will.

A Lawal combination in the fifth, badly buzzed Burudeen, who stumbled around the ring, inducing a standing eight count from the referee. He barely survived the round.

In the seventh round, Nurudeen was under heavy fire again until a massive right hand from Lawal flattened him. He somehow managed to beat the count, rising on steady legs, but the referee had seen enough. Official time of stoppage was 00:20.

“I prepared well for him because I knew how tough he could be, he never gives up and I’m happy I won,” Lawal said afterward. “I am looking forward to bigger things in my career. I want to keep improving with every fight and I hope to fight for bigger titles soon.”

Nurudeen would eventually grab the microphone from the ring announcer and called for a rematch.

“I want a rematch,” he declared. “He won today but I know I can beat him if we meet again.”

Ilo made it a one-sided affair from the first round until the seventh, when Houanvoegbe claimed he was unable to continue due to a shoulder injury.

Adewale “Masevex” Masebinu (5-3, 5 KOs) rebounded from his December 2019 TKO loss to Babatunde “Ola Monsourou” Idowu (1-4, 1 KO), stopping him in the third round of their scheduled eight-round bout.

in a four round women’s bantamweight contest, the debuting Oyindamola Ayodele and Abosede Obisanya 1-0-1 (1 KO) battled to a draw.

Segun “Success” Olanrewaju (3-0, 2 KOs) got a second win in a month when he TKOed Godday Appah (3-1, 3 KOs) in the third round of their scheduled eight-rounder

Lasgidi Fight Nights 4 was dubbed “Pugilists at Work” and promoted by Saleh Gloves Promotions in conjunction with Freels and Threels Promotions.