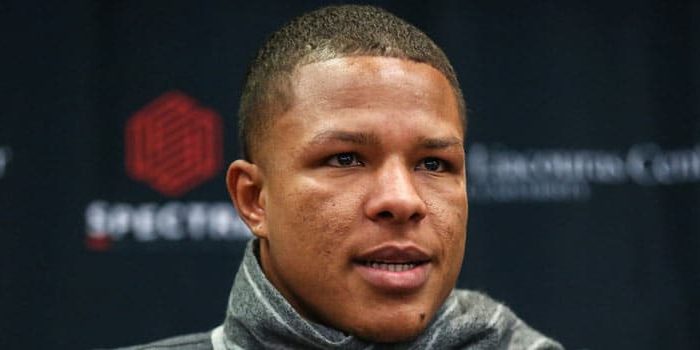 They’re planning a homecoming party in Philadelphia on January 18.

In the other corner, looking to spoil the party, is Santo Domingo’s Jeison Rosario, a 19-1-1 (13 KOs) fighter who is in the same position Williams himself was in the night he won his titles.

“I can see the look in his eye, and it reminds me of the look I had in my eye earlier this year against Hurd,” Williams said during last month’s press conference.

Rosario, who was returning from a routine visit to an eye doctor when I caught up to him, is looking to emulate what Williams did on that night. Like Williams, Rosario suffered a stoppage loss then had to earn his way back into contention, fighting opponents with an average record of 18-1. Similarly, he didn’t hesitate when taking a fight in the champ’s backyard.

“He’s the best 154-pounder in the world but we’re coming January 18 to take the titles back home to the Dominican Republic,” Rosario declared.

It’s an island with beautiful shores where airport workers greet tourists with a shot of Ron Barcelo. But only a few miles from the resorts, you see barefoot children begging in the streets and cars with broken windshields spewing black smoke pass by.

While the champ is buying real estate in Philadelphia and speaks of the hardships he faced in the past tense, Rosario is currently living the struggle. “I’m still poor,” he emphasized.

Growing up, Rosario dabbled in baseball and shot hoops. He remembers the day he chose to stick with boxing. “I knocked out two guys in the same day,” he recalled. He was 12.

Though Rosario quickly made a name for himself in the amateur ranks, the local facilities could only take him so far when he turned pro. Though boxing got off to a promising start in the Dominican Republic back in 1927, any momentum gained was lost in 1930. The country spent the thirty years that followed under the dictatorship of Rafael Trujillo, a man who promoted his three-year-old son to the rank of colonel and gave his daughter the official title of Queen.

Churches were required to display the phrase, “God in Heaven; Trujillo on Earth” and anyone still interested in boxing during those days found themselves doing most of their fighting on the road.

Things began to change in May of 1961, the night Trujillo’s driver made a right when he should’ve made a left. He drove the dictator’s ’57 Chevy straight into an ambush. When the smoke cleared, the riddled Chevy was found parked near the US embassy, a dead president stuffed inside the trunk.

As life in the republic began to normalize, boxing slowly resumed. Still, the very best had to pack their bags for better training. Some, like Carlos Teo Cruz and his younger brother, Leo, headed to Puerto Rico. Others headed to New York, settled at the foot of the George Washington Bridge and boxed on the undercards at the Sunnyside Garden or on those shows put on by Sopranos actor Cha Cha Ciarcia.

Though boxing in the Dominican Republic today enjoys a relatively active, but small, scene, the very best still find themselves leaving the island for better training.

“He never had a real massage before,” says Rosario’s trainer, Luis “Chiro” Perez. “It’s the first time he’s had a nutritionist, we even have a doctor in camp. This is the first training camp he’s ever been in.”

Perez, a stocky, low-key type who has been in the camps of Roy Jones Jr., Guillermo Jones, and Paulie Malignaggi, tells us to “expect a huge improvement.” The night Rosario lost was his first fight outside of the Dominican Republic. Since then, he’s beaten other prospects, sparred world class boxers, and has even seen snow. And he has lived up to his nickname.

“I wanted a name that stood out,” Rosario said of his moniker.

Originally called Banana Power, it’s just Banana now. It’s a nickname that means squat in the US. But in his homeland, where many don’t know what their next meal will be, it’s an important food staple. Sometimes fried, sometimes boiled, mashed even, it’s a part of all three meals of the day. It’s their octane. It’s Rosario’s fuel. And like many in Santo Domingo will tell you, the sweetest bananas aren’t the perfect yellow ones – it’s the ones that have a few bumps and bruises.