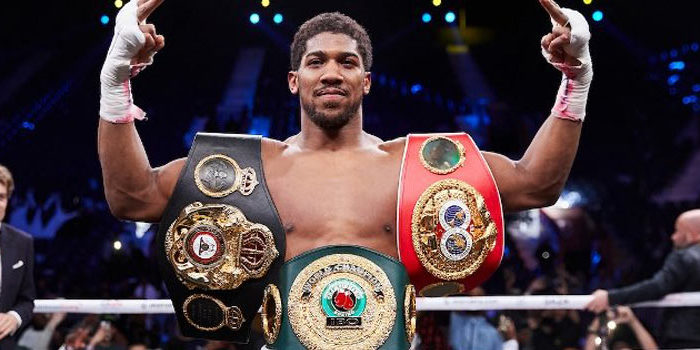 WBA/IBF/WBO World Heavyweight Champion Anthony Joshua is not overly concerned with the scenario of having to drop one of his world titles in the right scenario.

Last month in Saudi Arabia, Joshua reclaimed his belts with a dominant twelve round unanimous decision over Andy Ruiz in their anticipated rematch.

Now Joshua has two mandatory defense obligations on the table.

At the moment, Pulev is the frontrunner to face Joshua – which means Usyk would receive some step-aside funds with another fight to come in the meantime.

Frank Warren, promoter for Tyson Fury, believes Joshua should avoid both mandatory defenses and instead sit on the shelf to face the winner of the rematch between Fury and WBC champion Deontay Wilder – which takes place on February 22 at the MGM Grand in Las Vegas.

Joshua no issue with dropping a belt if securing a major fight is the goal.

“I always said the belts do not represent me. I will stand as a champion, even if I have to give one up,” Joshua told Sky Sports. “It would give me an opportunity to face another world champion – I’ve beaten four world champions on my record now.

“If I give up a belt it creates more history and entertainment. If I have to, I’ll give it away – but I’ll get it back again.”

However, Warren also cautioned that Wilder-Fury would bring about a summer trilogy – regardless of the winner.

“Tyson is going to be back in the ring with Wilder on February 22,” Warren told talkSPORT. “And they will fight again, irrespective of who wins, in the summer. ‘So that, at the moment, is all tied up.”