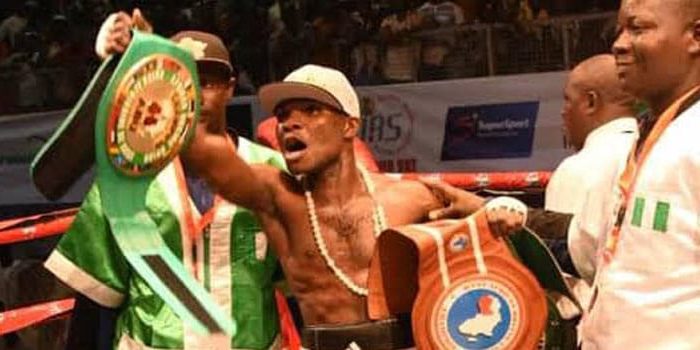 The Africa Boxing Union (ABU) has stripped Oto “Joeboy” Joseph of the lightweight title for failing to defend during the stipulated time.

Joseph, 16-0 (7 KOs) was scheduled to defend his title on October 12, 2019, against Rilwan “Real One” Oladosu, 13-0 (6 KOs) who is the West Africa champion and ranked twelfth by the ABU. But Joseph suffered in injury during training and subsequently failed to recover on time to fight on the rescheduled date of December 28.

Hence, the title is now vacant.

With NBBofC foot-dragging on confirming the stripping of their remaining ABU champion, BoxingAfrica.com contacted the Africa sanctioning body and the President, Houcine Houichi, who confirmed the latest development via email.

“Thanks for contacting us about the case of Oto Joseph who was our great ABU champion and to whom, we wish a quick recovery from his injury,” wrote Houichi. “Let me explain to you the situation of the ABU lightweight division:

“Oto Joseph won the title in December 26th, 2017, and he defended twice in July 2017 and April 2019. He was supposed to defend it again in October 12, 2019 against Rilwan Oladosu our West ABU regional champion but he was injured and we accepted to extend the deadline to December 2019 for respect to our champion. However, he couldn’t do it in December and in that case , we can´t keep the title frozen as the normal deadline is for six months.”

Will Joseph get another opportunity to fight for the title?

“Anyway, we shall reconsider Oto Joseph’s situation once he is completely recovered from his injury. I hope it´s clear now,” The ABU president concluded.

On his being stripped Joseph said, “I feel so sad and disappointed that I have been stripped, I defended the title twice and it’s unfortunate that I got injured while preparing for my third defense.

“I can say that NBBofC failed to protect me as they would have been able to ask ABU to give me until March since the bout is already in waiting.”

Joseph had returned to training after overcoming his injury worries and in recent days, expressed excitement at finally fighting Oladosu, as BoxingAfrica.com reported earlier on Wednesday.

When told that the Africa boxing sanctioning body will give him an opportunity to regain his title in the nearest future when he is fully ready, Joseph said, “No problem. A true champion faces challenges and I will surely regain my belt whenever the opportunity comes my way.”

The former Nigeria and West Africa champion reiterated that he still desires the showdown with “Real One.”

“I don’t care whether it’s a title fight or not, I will fight him and like I told you. I want him in March or April if they will still let the fight go ahead.”

Fight fans in Nigeria and Africa eagerly await this clash, dubbed “Fight of the Decade.”