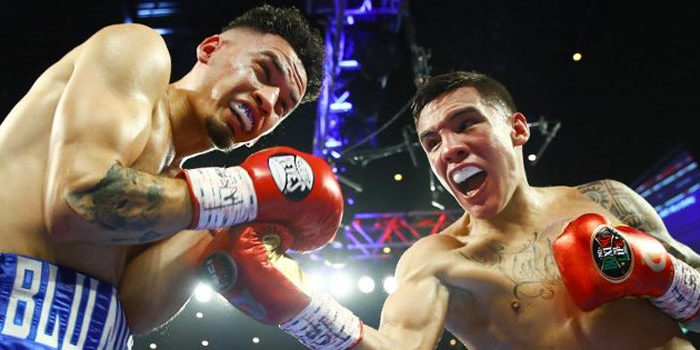 Oscar Valdez was determined to fight, whether it was a severely overweight opponent or one ready to jump in at a moment’s notice.

The decision nearly cost him a title shot waiting in the wings.

The former featherweight titlist from Nogales, Mexico had to climb off the canvas to rid himself of late replacement Adam Lopez, scoring a knockdown of his own en route to a 7th round knockout victory Saturday evening at The Cosmopolitan in Las Vegas, Nevada.

Both fighters hit the deck, but Valdez got the best of Lopez, flooring him and going on the attack until referee Russell Mora stopped the contest—perhaps prematurely—at 2:53 of round seven in their ESPN+ headliner.

Lopez accepted the assignment on barely a day’s notice, replacing Mexico’s Andres Gutierrez who showed up to Friday’s weigh-in at a beefy 141 pounds for a scheduled 130-pound main event. The 11-pound overage was automatic grounds for the Nevada State Athletic Commission to show Gutierrez the door, leaving a vacancy on the other side of Saturday’s main event.

A financial compensation and the assurance of a rehydration clause was enough to convince Lopez—who weighed 126 on Friday—to abandon his eight-round preliminary bout versus Luis Coria to step up in order to save the show, also providing the California native with the opportunity of a lifetime.

Dammit, if Lopez do all he could to seize the moment.

Having spent his career at 122 and 126 pounds, the 23-year old prospect attempted to work his jab, adhering to the game plan set out by Hall of Fame trainer and former two-division champion James ‘Buddy’ McGirt to disallow Valdez enough time to control the pace and fire off left hooks. Valdez erased that strategy in a hurry, forcing his way inside and ripping off power shots to Lopez’s body.

The minute-break between rounds helped Lopez get his head back in the fight and his trainer in his ear.

Valdez went on the attack in round two, but was a bit overconfident in believing he could walk through Lopez’s best punches. It was a lesson he learned the hard way, catching a 45°hookercut on the inside as he was sent stumbling to the canvas. Valdez beat the count but quickly found himself trailing on the scorecards in a fight that was supposed to serve as a clear path to a title shot.

“I just got hit,” Valdez (27-0, 21KOs) admitted to ESPN’s Crystina Poncher after the win, “Credit to Adam Lopez, he’s a warrior just like his father (the late Hector Lopez, a former 1990s contender) was.

“This is boxing. I prepared myself for two, three months for Gutierrez, but that’s no excuse. This kid is a warrior.”

Valdez proved his warrior’s heart in his own right. In his first fight since abandoning a three-plus year stay as a featherweight titlist, the two-time Mexican Olympian regained control in round three, offering angles and forcing Lopez to miss even on the occasions when he was able to take the lead.

Lopez readjusted in round four, heeding McGirt’s advice to constantly touch Valdez especially in the moments when his more experienced foe would pause to set up his attack. The strategy worked in the ring and in the eyes of the judges, as Lopez was ahead on one of the scorecards and down to one point on a second card at the time of a stoppage that was met with an unfavorable reaction.

Valdez turned the fight around in a big way in round seven. The naturally aggressive slugger forced Lopez to the ropes, landing a right hand upstairs and a grazing left hand to send him to the canvas. Lopez beat the count, but was unable to turn around the action.

The fight ending sequence left a bitter taste in the mouths of many observers, and most of all the affected party. Valdez went on the attack, sending Lopez in reverse and catching one too many punches for the referee’s liking in stopping the contest with just seven seconds to go in the round.

“He hurt me, but I was fine,” insisted Lopez, who snaps a five-fight win streak in falling to 13-2 (6KOs). “I was blocking shots. He caught me one time and the referee stopped it. There was seven seconds left, I was ready to come back.”

Barring a protest that would only fall on deaf ears, the best that Lopez can hope for is Top Rank doing right by him and properly bringing him along to another big fight. The streaking featherweight scored a minor upset in May, rising from the canvas to knock out Puerto Rico’s Jean Carlos Rivera in seven rounds. His lone loss has come versus current unbeaten junior featherweight Stephen Fulton, who is being groomed for a big fight in 2020.

A featherweight run seems likely for his future, although there remains the desire to settle up what he believes to be unfinished business.

For now, it appears that Valdez will move on to other business. The former titlist picks up his first win outside of featherweight, which sets up an almost certain showdown versus countryman Miguel Berchelt (36-1, 32KOs), who was seated ringside.

“Berchelt is a true champion inside the ring and outside the ring,” notes Valdez. “Fans love him. That’s the one I want to fight. He has that WBC belt, and I’m trying to take it back home.”