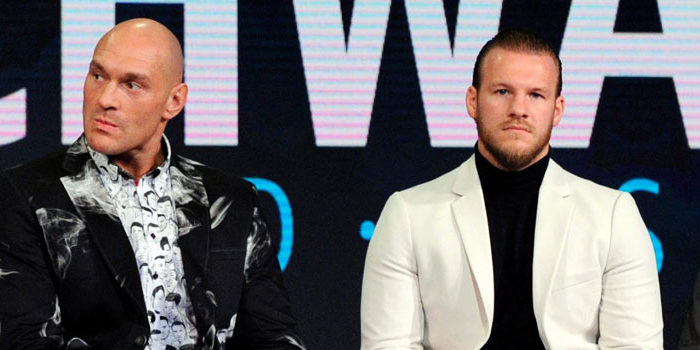 Tyson Fury has split with his trainer, Ben Davison, less than two months before his rematch with Deontay Wilder.

“Tyson and myself had to make decisions which resulted in our working relationship coming to an end,” Davison tweeted on Sunday. “We remain friends and he will smash the dosser.”

Fury later revealed that he will now work under Javan ‘Sugar’ Hill, the nephew of the late trainer Emmanuel Steward.

Hill will prepare Fury for his heavyweight rematch with the American WBC champion Wilder, which is set to be in February.

Fury had previously worked with Steward out of the Kronk gym in Detroit and used social media to post a picture of them both, along with Hill and the former world champion Andy Lee, with the caption: “Getting the old team back up and running”.

Fury, with Davison’s help, lost nearly 10 stone in a year before his extraordinary 12-round draw against Wilder in Los Angeles last December. Speculation that his uncle, Peter, might be persuaded to rejoin his team was misplaced, as there has been little dialogue between them since Fury beat the longtime champion Wladimir Klitschko in Germany four years ago.

In his autobiography, Behind The Mask, released last month, Fury said: “Nowadays there is no relationship between me and Peter or with Mick [Hennessy, his former promoter]. It hit me hard when I realised I couldn’t work with them again. As for Peter, it’s heartbreaking how our relationship disintegrated because, at one point in my life, he was like a second father to me.”

Fury and Davison have been similarly close. The trainer – who is again training his longtime friend Billy Joe Saunders after the fighter’s split with Dominic Ingle – played a pivotal role in helping Fury cope with his mental health and addiction problems.

Alongside a social media photo of a smiling Fury and his family, Davison wrote recently: “Seeing pictures like this means more to me than any achievements inside them ropes. I do not see the man that was on the brink two years ago.

Since the Wilder fight – when the Mancunian rose from the canvas in the 12th round – Fury has beaten Tom Schwarz and Otto Wallin in low-key bouts as part of a five-fight deal he signed in February with ESPN, said to be worth £80m.

An all-British world title fight in the summer between Fury and Anthony Joshua, who dazzled Andy Ruiz Jr to win their rematch in Saudi Arabia last Saturday, might now be harder to negotiate.