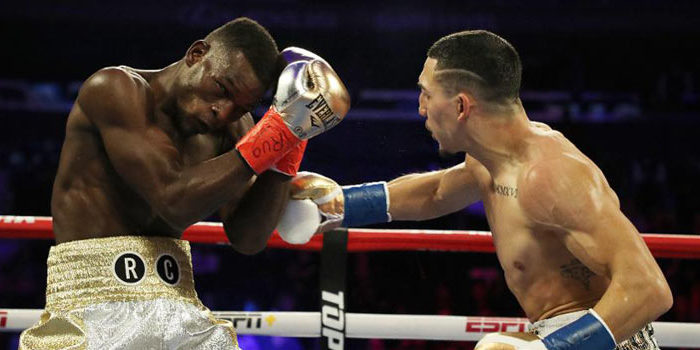 It was as shocking as it was swift.

Teofimo Lopez ended Richard Commey’s reign in stunning fashion at Madison Square Garden in New York, stopping the Ghanaian at 1:13 of the second round to become the new IBF world lightweight champion.

Few expected it to end so quickly. It was billed as a true 50-50 fight on a card headlined by a bout where welterweight titlist Terence Crawford was a 16-1 favorite to defeat the unheralded Egidijus Kavaliauskas.

That fight was supposed to end quickly. But not this one—a battle between a veteran, 32-year-old world champion hungry to prove himself as the man at 135 and a rising phenom 10 years younger who believed he was ready.

This was going to be a war. Instead, it never got to that point—and the ending came out of nowhere.

Commey got the better of Lopez in the first, snapping his head back with a sharp jab. They exchanged body shots but Commey was busier and appeared to control the action.

It was more of the same in the second as Commey continued to come forward, working behind a stiff jab. Then, just like that, it was over. Commey stepped in with a right at the same time Lopez did the same. Lopez’s shot was quicker, straighter and found its mark with devastating effect.

Commey dropped to the canvas, having lost of control of his legs. He got up too quickly and stumbled forward, hitting the canvas again. He rose a second time, still wobbly but beating the count. Lopez pounced, unloading on Commey, who covered up against the ropes. He was able to block most of the incoming but a right and a left got through. When Commey didn’t fire back, referee David Fields stepped in to halt the bout.

“We want to unify all four titles,” Lomachenko, who holds two of the major 135-pound belts, said of Lopez. “Now he’s a world champion, and now he’s in position to fight me.”

Commey, on the other hand, must now regroup. Still dangerous, he may find few takers at 135. It certainly shouldn’t stop him from trying. No matter what happens, the boy from Bukom fulfilled his dream of becoming world champion—and there’s no reason to believe he can’t do it again.