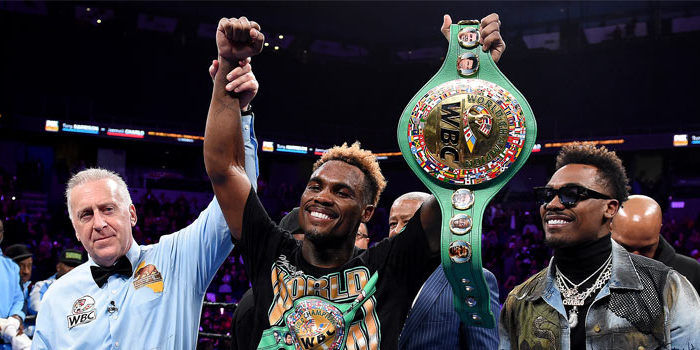 Jermell Charlo threw his hands up and walked toward his corner with the words still ringing in his ears, “ … and the new WBC super welterweight champion of the world, Tony Harrison!”

Charlo was in disbelief. “Did he really say that? Did they make a mistake?”

The Houston, Texas native had to wait almost a year to the day to erase those words, and to get his rematch against Harrison. Though to Charlo, it probably felt like every bit of the 31,449,600 seconds that it took from the time they first fought at Brooklyn’s Barclays Center in 2018 to Saturday night’s FOX PBC Fight Night headliner at the Toyota Arena, in Ontario, California.

This time, Charlo (33-1, 17 KOs) vowed he wasn’t going to leave it up to the judges. This time, he didn’t, becoming a two-time WBC World Super Welterweight Champion by stopping the crafty and determined Harrison at 2:28 of the 11th round.

“I got that belt. It took me a while, and got in the 11th and I didn’t leave it up to the judges,” a jubilant Charlo said afterward. “Tony is a former champion, and he came to fight. He had a lot on the line. He had pressure on him. I did what I had to do.

“I dictated, I dominated and I knocked him out.”

Possibly charged up with emotion, Charlo was wildly aggressive by winging wide, strong punches at the outset. Harrison, for his part, was composed and patient. Responding to two short rights, Charlo plowed a left hook right on Harrison’s chin that put him down in the second with :19 left in the round.

“That (first knockdown) let (Harrison) know that the power is real and should be avoided and respected,” Charlo said. “Listen, I’m a gentleman at the end of the day. I have a family to feed, and so does he. He did what he had to do, and I did what I had to do.

So did Charlo. In the sixth, Harrison (28-3, 21 KOs) stuck out his tongue and wiggled his hips for the crowd after Charlo landed a few blows downstairs. Charlo was undeterred.

Harrison, to his credit, had his hands up and was catching some of Charlo’s loose power shots. In the seventh, he began opening up on Charlo, landing rights on his head.

Through eight, the tactical tone of the fight favored Harrison. It wasn’t as easy as Charlo anticipated it. He was, however, making subtle adjusting, throwing more and working the angles on the inside.

In the 10th, Charlo began opening up as he did in the early rounds. But Harrison closed, landing three straight rights. It was hard to decipher who was up.

Harrison continued to showboat in the 11th, sticking out his arms as if inviting Charlo to hit him—and still, Charlo didn’t jump him.

A minute later, he did.

A left hook, set up beautifully by a left to the body, caused Harrison to lose control of the legs. He staggered back to the ropes before dropping for the second time in the fight. Harrison bravely rose unsteadily. Three left uppercuts, the last of which snapping Harrison’s head back, floored him again.

Charlo, thinking he’d won, ran across the ring, celebrating in the corner on the ropes. But Harrison got up again. Another Charlo barrage convinced referee Jack Reiss to call it off.

At the time of the stoppage, judges Lou Moret and David Sutherland each had Charlo up by 96-93 scores, while judge Tim Cheatham had it 95-94 for Harrison.

“Jack is a championship referee and I won’t question what he saw,” said Harrison, in response to whether the fight was called too early. “I started getting a little lax and got caught looking between hooks. He earned it.

“The game plan was to do a little bit of boxing. The shots he was hitting me with weren’t really hurting. But taking a year off, my body wasn’t used to it. I never trade offense for defense, he caught me in between. I feel like I let us down, I let me down. It’s one and one. Back to the drawing board.

“I would love to do it one more time.”

Charlo has his sights set on a unification versus WBA/IBF 154-pound champion Julian Williams. Williams defends his title versus Jeison Rosario in January. A third bout versus Harrison is also possible. Either way, the fans are the real winners.

In the FOX televised opener, lightweight René Téllez Girón (14-1, 8 KOs) stopped previously undefeated prospect Karlos Balderas (9-1, 8 KOs) at 2:59 of the sixth round of a scheduled eight-rounder.

Girón knocked down Balderas late in the third round with a left hook. When Ray Corona allowed Balderas to continue, the 23-year-old from Santa Maria, CA, stumbled backwards as the bell rang to end the round.

Balderas came back to make it interesting, giving as good as he got until another left hook from Girón, 20, from Queretaro, Mexico, found his chin in the sixth. This time, Corona took caution and waved it over.

“After I knocked him down in the third round, I saw his eyes were rolled back like he was hurt, but he has the heart of a lion,’’ Girón said. “He didn’t want to lose his undefeated record in front of his people. When he got up, I was like, ‘Wow! He got up! He’s up!’ So, I kept on him and left everything in the ring. I’m really happy. Karlos had said he fought with the best and he was an Olympian. Well, I fought a lot of people too and you see the result.’’

In a shocker, featherweight Oscar Escandon (26-5, 18 KOs) stopped rising 24-year-old Filipino prospect Jhack Tepora at 1:30 of the first round of a scheduled 10-rounder. A loser of three-straight fights coming into the bout, Escandon, 35, dropped a left hand to the body that sent Tepora (23-1, 17 KOs) down, forcing referee Jack Reiss to wave it over.

Andre Dirrell (27-3, 17 KOs) pounded overmatched Juan Ubaldo Cabrera (24-3, 16 KOs), before referee Jerry Cantu wisely ended it at 1:36 of the fifth round of a scheduled 10-round light heavyweight fight. It was Dirrell’s first fight in 21 months.