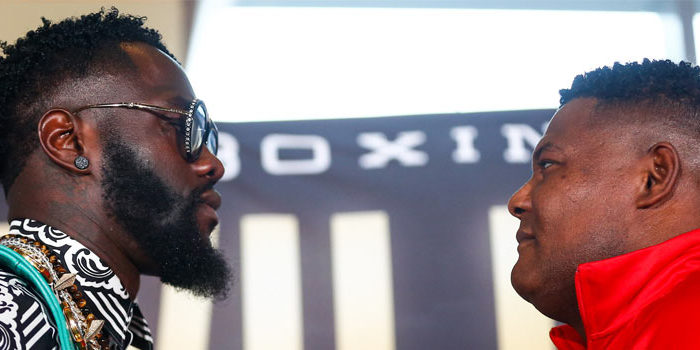 Here is what the fighters had to say Saturday from the Lexus Club at STAPLES Center:

“Here we go again. The only way for there to be a rematch was for there to be an exciting first fight. When I first met this man in the ring, it was amazing and inspiring to go up against such a skillful fighter. It was such a great experience for me and an honor for me to face him.

“I’m the best in the world. I’ve said it before and I’ll say it again. I believe in that and I’ve proven that. I’ve proved so many people wrong and I still have to do it. That gives me the motivation and the will to keep going.

“I created a bond with Ortiz fighting the first time because of our daughters. We were two fathers in the ring who had to battle it out for our families. There’s no better feeling than going to war against another gladiator.

“There wasn’t really anything that I learned about myself in the first fight, but it was confirmation of something I had already known. I know what I can do and I believe in myself. I didn’t feel like I was proving anything to myself, it was just proving it to others.

“We’re passionate about this and we want to give the fans the best fight possible. We will do that again because I never leave you without having a great time and giving you excitement. If you’ve never seen a boxing match before, I’m the person to come see. If you want to see excitement, this is the fight to be at. This is the fight to order.

“I’m a true champion. A true champion can walk it like he talks it, and I walk it like I talk it every time. On November 23 I expect to see everyone there or ordering it on pay-per-view, because I can’t wait.”

“I’m very happy to have this opportunity at the rematch. Wilder had the courage to take the rematch and that’s a big part of why this is happening. I’m excited for this fight and I’m going to make the most of it.

“There are no excuses from me. The first fight is over. Now we’re on to this fight. I’m going to get the victory. There are things that are being done differently, but it will all be decided in the ring.

“I’m focused on this fight and only this fight. I’m not a man of many words, but the opportunity is here and it was destined to be. Here we go.

“A warrior doesn’t abandon his mission. My mission is to become world champion. I’ve trained very hard since my loss and it will all culminate on November 23.

“I won’t make the same mistake this time like I made in the last fight. I’m going to be more prepared, more aggressive and have more of everything. I’m taking it all up a level.

“There was no reason for me not winning the first fight, it just is what it is. We knew that one of us was going to get knocked out. I have that same sentiment for the rematch. This fight is not going 12 rounds.

“I want November 23 to get here sooner than later. I’m ready to step into the ring and do the job and become heavyweight world champion.”

“I work hard for every fight and it’s going to be the same for this fight. This opportunity came to fight for the 130-pound title and I’m excited to fight for it. I want to become a four-division world champion.

“I’m going to see how I feel at 130. If I’m strong I definitely feel like I will have more fights there. My goal right now is to win this world title. That’s what I’m focused on.

“Miguel Flores is a tough fighter and I don’t underestimate him. I know it’s going to be a hard fight. He’s going to come with everything he has. It’s the opportunity of his lifetime.

“I’m really motivated like this is my first world title. This is something big for me. It will help me be remembered as one of the best Mexican fighters and that’s my goal.

“Most importantly, we’re going to give the fans a great show on fight night. To be the co-main event for Deontay Wilder is amazing. He always gives a great show, but my job is to give everyone even more excitement.”

“They say you don’t get second chances in life, but I am getting that and I’m very grateful. Everything happens for a reason. This fight was meant to happen and I plan to take full advantage of it.

“Being at 130 or 126 doesn’t make a difference to me when fighting Leo, it’s still the same guy. He started his career at 118 anyway and I’ve had it in my brain for so long about how I’m going to beat him.

“The strategy is to outdo him in anything. Outsmart him, out hustle him and just be able to do it all. He does everything well and he’s a veteran. I know he has tricks under his sleeve, but we need to be ready for that and have something ready to go back at him.

“This is an even bigger stage being the co-main event to the heavyweight championship of the world in Las Vegas. Everything has worked out perfect for me. That wasn’t my mentality when the injury happened, but now it all makes sense.

“I want to be able to be the guy. By beating Leo, I become the guy. It’s both of our jobs to turn everyone into believers. After this fight, everyone is going to know this was a great fight.

“Our focus is on Leo Santa Cruz. November 23 is all that’s on my mind. A lot of people don’t know how good my boxing skills are and how crafty I can be in the ring. They’re going to be in for a surprise.”