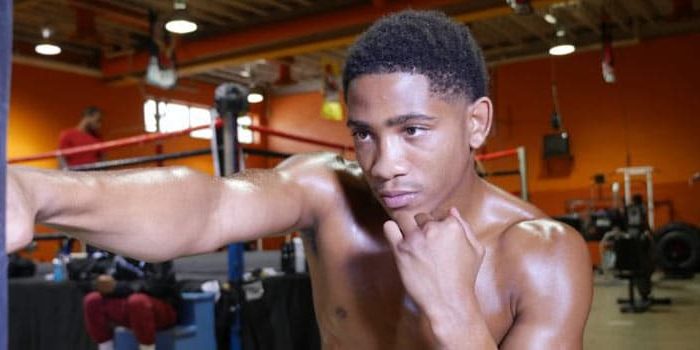 After a sensational professional debut from the nineteen-year-old Baltimore native on July 27, 2019,  on the Davis vs. Nunez undercard, conversations came about that quickly translated into Warren joining the Mayweather Promotions stable.

Warren was born on June 9, 2000 in Catsonville, Maryland, a small suburb of Baltimore, Maryland. He was introduced to the sport by his father at the young age of eight years old. It wasn’t long before Warren found himself enamored by the sport and quickly found a way to juggle his training schedule at the legendary Upton Gym with his studies. At eleven-years-old Warren teamed up with coaches Calvin Ford, Kenny Ellis, and Russ Blakey. His amateur career blossomed shortly after. His experience as an amateur includes a 2018 State Golden Gloves championship, he was ranked number two in the Nationals in 2016 and 2017 and was ranked number two in the USA at 132. Earlier this year he was invited to train with the USA boxing team, and later won the State Golden Gloves title for a second time. Warren completed his amateur career with a record of 68-24 at nineteen years old.

After competing with highly ranked amateurs, Warren made the choice to take his experience to the professional level. On July 27, 2019 the hungry Baltimore native was given an opportunity to make his professional debut on his gym mate, and two-time world champion, Gervonta Davis’ card in their hometown of Baltimore, Maryland in front of a sold-out crowd of 16,000 inside Royal Farms Arena. Warren didn’t leave it up to judges and stunned the crowd with a powerful performance stopping his opponent, Davonte McCowen, in round 2 within 2:57.

The undefeated prospect is currently preparing for his second professional fight which is set to take place in Las Vegas, Nevada on the Sin City Showdown card live from Sam’s Town Live on November 1st.

“This is really a dream come true, said Warren. Coming from a city where crime and poverty affects many families, I’m blessed enough to do what I love and sign with the best promotional company in boxing.”

“Continuing to bring talent into our stable provides opportunities and opens doors for these prospects to have promising careers,” says Mayweather Promotions CEO, Leonard Ellerbe. This kid is another one that I know has the skillset and discipline to take him far. We’re happy to welcome him to the team!”