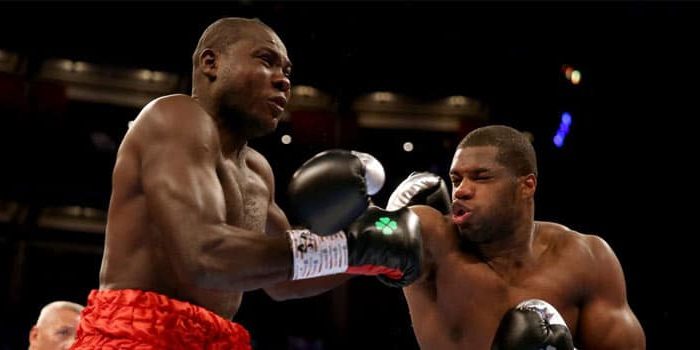 Daniel ‘Dynamite’ Dubois continues to be a handful for any heavyweight in his path. The unbeaten prospect-turned-contender picked up his fourth knockout in as many fights on the year, the latest coming in a one-round blitzing of Ghana’s Ebenezer Tetteh in their main event Friday evening at Royal Albert Hall in the Kensington section of London, England.

Two knockdowns paved the way for the stoppage, which came at 2:10 of round one.

Dubois entered the contest on the heels of his most impressive win to date, a 5th round stoppage of countryman and previously unbeaten Nathan Gorman this past July at London’s O2 Arena. His latest appearance also came versus an undefeated heavyweight, though nowhere near the level of the local favorite.

As much was evident from the bout’s first exchange. Tetteh (19-1, 16KOs) was fighting outside of his Accra, Ghana hometown for the first time in his career, his inflated record the product of handpicked opposition. Despite his knockout to win ratio, the visiting 31-year old lacked the firepower to trade, as well as the whiskers to withstand the incoming.

Dubois was measured yet explosive in his attack, connecting downstairs and up top in creating his openings. He found his way in at the midway point, connecting in rapid fire succession with a right hand shot ending the sequence in producing the first knockdown.

Tetteh beat the count but was clearly already on his way out. Dubois went on the attack, flooring his foe mere seconds later. Tetteh once again rose to his feet, only for referee Mark Lyson to decide it was enough in waving off the contest.

Dubois rolls to 13-0 (12KOs), picking up his fourth straight stoppage since the lone distance fight of his career which came in a 10-round win versus reluctant American journeyman Kevin Johnson last December. All four knockouts in 2019 have ended in five rounds or less, with Friday’s win marking his quickest outing since a 48-second stoppage of AJ Carter just more than two years ago.