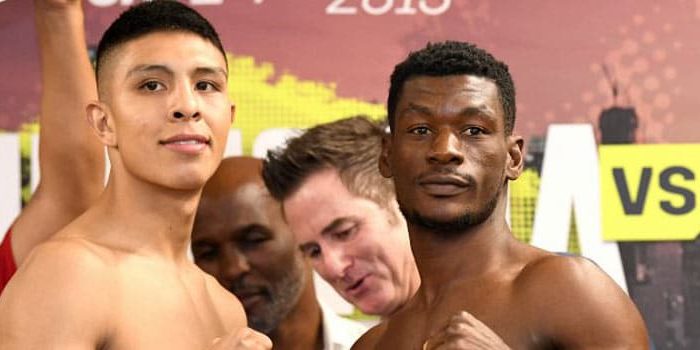 On the other hand, the 28-year-old Allotey (40-3, 30 KOs) scaled 153-pounds. The Ghanaian will be fighting without trainer Ofori Asare, who was unable to secure a visa to travel to the USA.

“How can I travel to the States for a fight of this nature without my trainer just because he was denied a visa to come with me?” Allotey told Ghanaian news outlet, Graphic.com.gh.

“This will definitely affect my chances on Saturday considering the nature of the fight because even if I get another trainer here, how can he prepare me within days to win a fight of this magnitude.”

The comments do not bode well for Allotey’s chances, despite Munguia being the weakest of the top fighters in a division that includes unified world champion Julian Williams, WBC titlist Tony Harrison, and former champions Jarrett Hurd and Jermell Charlo.

Further, it also speaks to a lack of preparation and professionalism on the part of Team Allotey, which includes manager Ivan Bruce Cudjoe and Ellis Quaye of Cabic Management and Promotions–both of whom will no doubt be present ringside for the fight.

In a story written by the Graphic, Asare said he was baffled how his visa application by Cabic Management and Promotions failed to materialise, having previously been informed by the boxing syndicate about the official communications with the American Embassy in Accra.

Asare noted that he was yet to secure a visa to travel to the United States ahead of Saturday’s fight because he could not get a date for an interview session at the US Embassy despite his boxer and managers having their chance to secure themselves visas.

He said his continuous wait for his turn at the US Embassy proved futile despite assurances by Cabic Management and Promotions that he would be called for his visa.

“I haven’t been able to go for an interview for the visa because I have been waiting for my date and it hasn’t come.

“The managers told me they applied for my visa with theirs but as it stands now, they have theirs and they are gone so I don’t know what happened to mine,” he explained.