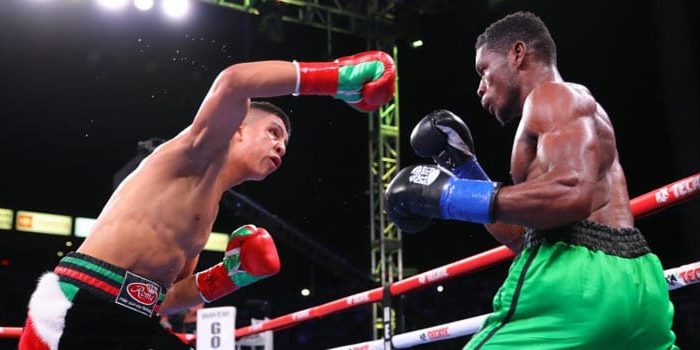 CARSON, Calif. — If this was his last fight as a junior middleweight, then WBO champion Jaime Munguia certainly left his mark on the division.

In front of his fans on Mexican Independence Day, the 22-year-old shook off a slow start to brutalize Patrick Allotey for a fourth-round TKO after Allotey’s corner had seen enough of their fighter getting beaten up. The title fight served as the main event at Dignity Health Sports Park and was streamed live on DAZN.

Munguia (34-0, 27 KOs) made his fifth title defense a successful one with a scintillating performance. The young Mexican star sent Allotey to the canvas on three occasions, and with former champion Erik Morales in his corner as his new head trainer, Munguia demonstrated a heightened fight IQ as he cut off the ring and kept his opponent from using his movement to escape his advances.

It was quite the turnaround for Munguia after a subpar performance in April, when he escaped with a decision victory against Dennis Hogan. Here we saw a determined Munguia take a couple of rounds to figure out what his opponent had before opening up the toolbox in the fourth.

To his credit, Allotey (40-4, 30 KOs) had some success early as he landed combinations to keep Munguia from shrinking the ring. Unfortunately, those punches had no effect on Munguia. By the third round, Munguia had seen enough and plowed right into his Ghanaian opponent from Ghana. Pinned against the ropes, Allotey couldn’t find an escape route and was punished with a body and head combination that was punctuated by a short uppercut. Allotey took a knee but was damaged goods at that point.

Allotey attempted to circle away but again found himself the recepient of a hard combination that sent him to the canvas as the round ended. He made it to his feet but his corner wasn’t too thrilled with letting him return for another round. With blood in the water, Munguia went on the hunt and plowed through Allotey with yet another combination that put Allotey down after a delayed reaction. He again managed to get to his feet, but his corner had seen enough and called a halt to the fight at the 2:18 mark.

Although he wouldn’t commit to this being his final fight as a junior middleweight, the tough weight cut may have been too much for Munguia. A future at middleweight, where the names Canelo, Golovkin and Andrade rule, is where his true test lies.