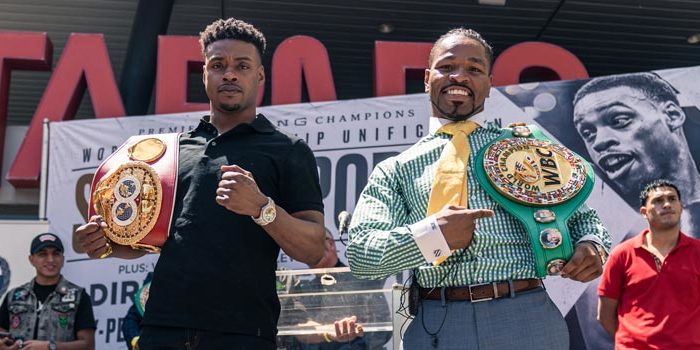 Shawn Porter feels there will be more at stake when he encounters Errol Spence Jr. than two welterweight titles.

Porter contends that the winner of their 12-round, 147-pound title unification fight should be considered the best welterweight in boxing. The 31-year-old Porter (30-2-1, 17 KOs), of Akron, Ohio, and the 29-year-old Spence (25-0, 21 KOs), of DeSoto, Texas, will meet September 28 for Porter’s WBC welterweight title and Spence’s IBF belt at Staples Center in Los Angeles.

Spence and WBO champion Terence Crawford (35-0, 26 KOs) are commonly considered among media and fans as the top two welterweights in boxing. Crawford, of Omaha, Nebraska, typically is listed within the top three on credible pound-for-pound lists as well.

Nevertheless, Spence agreed later on the aforementioned conference call with Porter’s perspective on the outcome of their fight determining boxing’s best welterweight.

The Spence-Porter winner will be the only welterweight with two titles. Crawford and WBA champ Manny Pacquiao (62-7-2, 39 KOs) each own one.

Most sports books list Spence as at least a 10-1 favorite over Porter. They’ll headline a four-fight FOX Sports Pay-Per-View telecast a week from Saturday night.