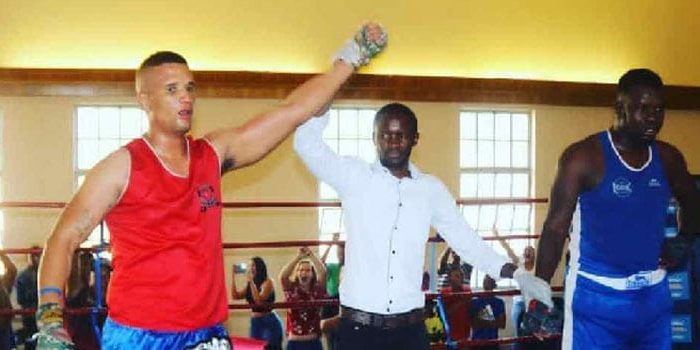 REHOBOTH’s first boxing tournament on Saturday was a huge success as several hundred fans packed the Hermanus van Wyk Hall to cheer the pugilists on.

The Ruff Diamondz Development Boxing Tournament, which was held in collaboration with the Hardap Boxing Federation and Legends Boxing Academy (LBA), saw a total of 25 amateur fights, and according to Patrick Esterhuizen of LBA it was a big hit.

“The Hermanus van Wyk Community Hall was packed to the rafters as a couple of hundred people showed up to witness this historical event. Cameron ‘Hotdog’ Mcnab won the main event and made the Rehoboth people very proud,” he said.

In the main bout – a super heavyweight fight over three rounds – McNab showed great determination to recover from a second round knockdown to win the fight, much to the delight of his home town fans.

“Rehoboth never saw anything like this – the crowd was in ecstasy. Cameron was knocked down in the second round, but came back and brought the fight to Onesmus. He landed well with his jabs, while his defence was also good, as he made Onesmus miss a lot. All three judges scored the fight in Cameron’s favour,” Esterhuizen said.

Another LBA boxer who impressed was Nazil Ali, who had the crowd on its feet in a narrow 2-1 victory against Elroy Zaahl from Mistake Boxing Gym.

Esterhuizen thanked the deputy minister of sport Agnes Tjongarero who attended the event and the referees and judges from Khomas who officiated at the event; as well as the medical personnel who were on standby.

He added that the next boxing event in Rehoboth will be communicated to the public soon.