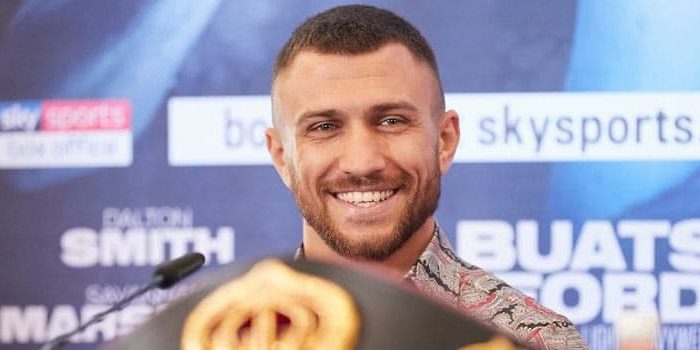 Vasiliy Lomachenko would like to fight Teofimo Lopez next.

“Of course I wanna fight with Teofimo Lopez,” Lomachenko told ESPN’s Bernardo Osuna in the ring. “But I think he’ll not win this fight.”

Ukraine’s Lomachenko has been critical of Lopez, the brash Brooklyn native who has repeatedly called for a shot at the three-division champion. Lomachenko has contended that the 22-year-old Lopez hasn’t accomplished anything in boxing yet, certainly not enough to warrant a fight with him.

If Lopez were to beat Commey, however, he’d own the one lightweight title that Lomachenko needs to become the undisputed champion in that division. Ghana’s Commey (29-2, 26 KOs) is expected to defend his IBF 135-pound championship against Lopez (14-0, 11 KOs) on December 14 at Madison Square Garden in New York.

Though Commey-Lopez won’t take place for another 3½ months, Lomachenko expects to wait to face the winner in his next fight.

“Of course I want the fight next, but it depends not [on] me,” Lomachenko said. “It depends on our promoter.”

Campbell was the mandatory challenger for the WBC lightweight title, which Mikey Garcia gave up late in April once he decided his next fight would take place above the lightweight limit of 135 pounds. The WBC later ordered a bout between Campbell and Lomachenko for that unclaimed championship.