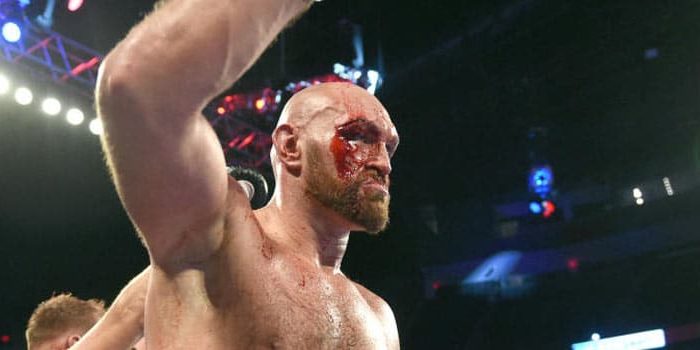 The Tyson Fury hype will die down a bit following his 12-round unanimous decision win over Otto Wallin Saturday night at T-Mobile Arena in Las Vegas, Nevada.

Fury, 31, 29-0-1 (20 KOs), got all he could handle from southpaw Wallin, who opened a terrible gash over his right eye with a hard left cross in the third, had his moments throughout and hurt Fury again in the final round. It wasn’t enough to overcome the former unified world heavyweight champion, who fought through the cut and used his size and experience to wear Wallin down and win by too-wide scores of 116-112, 117-111, 118-110.

Wallin was as high as a 25-1 underdog going into the fight. The unknown Swede hadn’t fought any top contender going in and wasn’t expected to last long against a Fury many believe might be the best heavyweight in the world. Clearly, Wallin (20-1, 13 KOs) was better than most expected–and perhaps Fury not as good as some perceived.

Wallin won the first round working the jab to the body. Fury began letting his hands go in the second, unveiling his own jab and catching Wallin coming in. His momentum came to a screeching halt late in the third, when a short left cross opened a big cut on Fury’s right brow. Wallin took over from that point on, controlling the bout through the first half.

As the fight progressed, the cut got worse. Ringside officials, however, were hesitant to stop the action, as they may have for another fighter. And Fury proved them correct, coming on down the stretch with hard body punches. He also leaned on a fatiguing Wallin at every chance, keeping him on the ropes for long stretches.

Fury pulled away on the cards, despite blood leaving his face a bloody mess. Wallin needed a knockout heading into the twelfth and final round. And he nearly delivered, hurting Fury with a hard left hand. The Englishman held on, taking more blows in the process, but Wallin imply didn’t have the strength or the energy to attempt to finish him off.

Fury now looks to a rematch against undefeated WBC World Heavyweight Champion Deontay Wilder, who is set to face dangerous Cuban southpaw Luis “King Kong” Ortiz for the second time, on November 23. However, with his cut needing time to heal, it’s unlikely we see Fury in the ring until then.

As for Wallin, the unknown Swede now places himself among the ranks of the top heavyweights. Opportunity is likely to come knocking again.