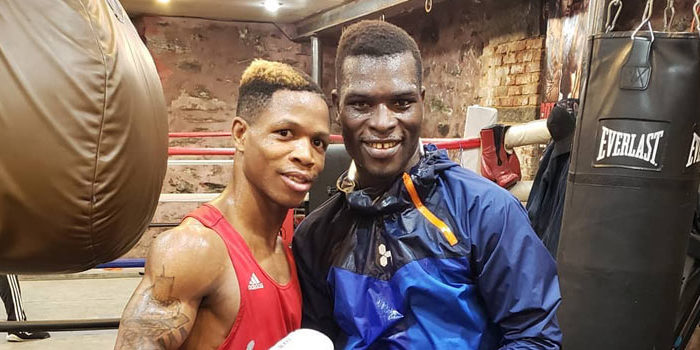 From the return of Duke Micah to finalization of Richard Commey’s next move, it’s been a busy week for Ghana boxing and Michael Amoo-Bediako.

Ending a 14-month layoff, the Brooklyn-based Micah was in the mood to make up for lost time, controlling the ring space with the jab before quickly turning to hooks to the body and to the head. Cruz barely made it out of the first round.

Micah, 27, 23-0 (19 KOs), continued to batter the bloodied Cruz (13-2, 7 KOs) in the second as ringsiders pleaded for the referee to stop the one-sided beatdown. When the bout was halted, Micah sank to his knees, showing relief after months of pent-up frustration.

“It was a fantastic performance considering his long layoff,” said Amoo-Bediako during an interview with BoxingAfrica.com. “The whole team was a little surprised at the level of the performance. We all know this kid is special because he works so hard in the gym and always gives his all and we are super excited to see what the future holds.”

The plan is to keep Micah busy and build on this latest performance while his team—which also includes co-manager Keith Connolly and trainers Andre Rozier, Terrence Henderson and Leonard Wilson—searches for world title opportunities between two weight divisions.

“We believe Duke will be competing at 115- to 118-pounds for the foreseeable future and we hope to have Duke back out by the end of the year,” Amoo-Bediako outlined.

“2020 looks exciting as we feel Duke will be ready for a world title by then. We’ll try to get one in either weight class. We’ll just have to see which opportunities present themselves but in the meantime the plan is to keep Duke busy to make up for lost time.”

The winner of Commey-Lopez will face WBA/WBC/WBO World Lightweight Champion Vasiliy Lomachenko in a bout for the undisputed lightweight championship.

Lomachenko, 31, 14-1 (10 KOs) added the vacant WBC belt last Saturday with a 12-round unanimous decision over Luke Campbell (20-3, 16 KOs) at O2 Arena in London. Both Commey and Amoo-Bediako watched the proceedings with interest.

“Lomachenko defeated Luke Campbell but didn’t have it all his own way,” noted Amoo-Bediako. “A lot of people saw flaws and Campbell hurt him on a number of occasions.”

“We are not looking past Lopez,” he continued. “Richard is fully committed to defeating Lopez and does not want to disrespect his opponent by talking about a unification bout. I, for one, am glad now that Richard’s name is being talked about with other top lightweights as he is a world champion and deserves that respect. But first things first, Andre Rozier and his team are focusing on one thing and one thing only: Getting Richard prepared for Lopez, then we’ll see what happens after that.”

Both Commey and Micah are aiming to close out the year strong, perhaps paving the way for their kinsmen to follow suit.

“The future is looking bright for Streetwise Management and it’s two Ghanaian imports,” said Amoo-Bediako. “They are raising the flag of Ghana in the boxing world and we are scouting for more talent from the formerly-named Gold Coast to sprinkle more gold dust on the boxing circuit of the USA.”