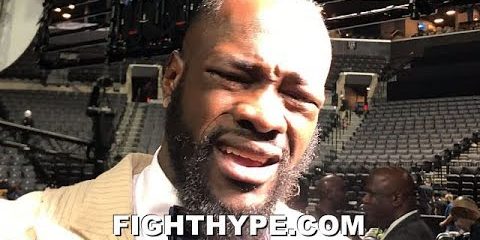 WBC World Heavyweight Champion Deontay Wilder was shocked when he learned who Tyson Fury’s next opponent is going to be.

Last week, it was revealed that Fury will take on undefeated–and unknown–Otto Wallin from Sweden. This will be Fury’s second straight bout against an opponent relatively unknown to the boxing masses. Wilder, on the other hand, will rematch dangerous Cuban Luis Ortiz sometime in November.

Fury’s opponent announcement drew the ire of plenty of boxing fans on Twitter, including the WBC heavyweight champion himself.

“With Fury, he’s a joke overall,” Wilder said to Boxingscene.com. “This lineal stuff is crazy. It don’t look good for boxing to do that. And then you go and fight lower opposition. Like, who is this other guy [Wallin]? Everybody’s putting their titles on the line against tough opposition. But he’s not a champion, so we can understand his behavior and the selection of opponents he’s chosen.”