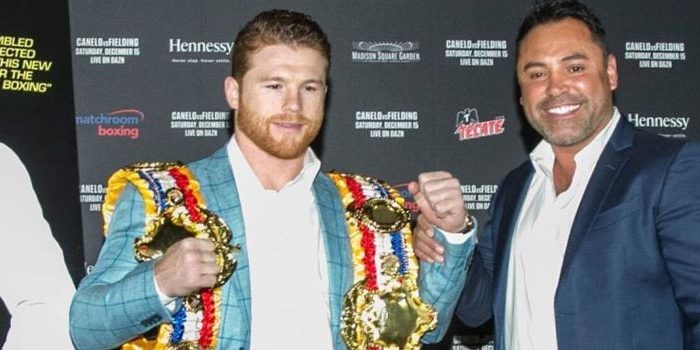 Reality has finally set in for Saul ‘Canelo’ Alvarez—and he’s none too pleased about it.

The World middleweight champion went public for the first time on Friday with his thoughts on being stripped of the International Boxing Federation (IBF) middleweight title on Thursday. Mexico’s Alvarez was due to make a mandatory defense versus Sergiy Derevyanchenko, only for the latest deadline to expire without a confirmed deal in place.

Unbeknown to Alvarez—or so he’s suggested out loud—a stipulation in the latest extension called for the IBF to vacate the title by close of business day Thursday in the event the two sides could not come to terms. The ruling came about after having granted multiple extensions over the course of the past two weeks.

Apparently, what was worked out in that regard was literally news to the party affected the most in the ordeal.

I'm very upset and ashamed with my fans, to be unfairly stripped of my belt by the IBF, but specially when i did not have the knowledge of the agreement that GBP match maker had signed.

“I’m very upset and ashamed (along with) my fans, to have been unfairly stripped of my belt by the IBF,” Alvarez (52-1-2, 35KOs) revealed through his verified social media accounts on Friday. “Especially, when I did not have the knowledge of the agreement that GBP matchmaker had signed.”

I stand behind every single one of my soldiers during battle. @Micheladatime is the best match maker in the business. @GoldenBoyBoxing has been the best and top promoter for a reason, it’s called loyalty, hard work, intelligence, and FAMILY.

Alvarez was ordered to defend versus Derevyanchenko just days after claiming the IBF belt in a three-title unification bout with Daniel Jacobs this past May in Las Vegas, Nev. With the win came the inherited mandatory, with the sanctioning body calling for both parties to open negotiations without so much as a congratulatory letter sent to its new champ.

A mea culpa was offered by the New Jersey-based organization one day after the fight was ordered, stating that Alvarez was granted a 30-day window where he could formally request a voluntary defense. Unfortunately, it only added to the confusion as Golden Boy was of the belief that either the World Boxing Council (WBC) or World Boxing Association (WBA) was next in the rotation of mandatory defenses.

With that came a purse bid hearing called for July 15. Golden Boy—on behalf of Alvarez—managed to have the session postponed twice and canceled altogether, confident that a deal could be reached to appease all parties. Four more deadlines were imposed until the IBF let the clock run out on Thursday without hearing any more pleas for more time.

Derevyanchenko (13-1) will now fight for the vacant title, his second run at the same crown. The Brooklyn-based Ukrainian puncher came up just short versus Jacobs, his career-long stablemate in their 12-round thriller last October. Another run at the title has come about courtesy of his close but clear points win over Jack Culcay in their title eliminator this past April.

While not yet finalized, Derevyanchenko will likely next face Gennadiy ‘GGG’ Golovkin for the vacant title. Golovkin, a former unified titlist, is next in line according to the IBF rankings and is already in advanced talks for such a fight to happen with a targeted date of Oct. 5 at Madison Square Garden in New York City.

Pending the two coming to final terms, such a bout will stream live on DAZN-USA with whom Alvarez signed a record-breaking 10-fight, $350 million contract last fall. The sports streaming platform also went out of its way to sign Golovkin, with whom Alvarez fought to a draw and then beat via majority decision in their two-fight set.

DAZN’s intention all along was to stage a third fight, of the belief it would help bolster subscriptions well past the 1 million subscriber base they’d hope to reach in their first year of business in the U.S. market. Alvarez was frosty on such a fight, in particular for his general disdain of Golovkin but also of the insistence that he wanted the Kazakhstan native to first reclaim a belt before coming back to the table.

The one he could bring is the very strap Alvarez just conceded, his second in just over a month without losing either in the ring.

He accepted a WBC ruling to inherit a “Franchise” champion label, which came with his actual belt being handed over to interim titlist Jermall Charlo. It was the second time Alvarez has parted ways with the title, the prior occasion coming after his refusal to defend versus Golovkin in 2016.

The development led to a year-long grudge held by Alvarez—and by proxy, Golden Boy—with the Mexico-based sanctioning body. The two sides eventually hugged it out in early 2018, with Alvarez going on to reclaim the belt in his aforementioned win over Golovkin.

Now down to one title, Alvarez is coming out swinging outside the ropes. The public revelation confirmed rumors first revealed by ESPN.com’s Steve Kim of their being internal issues between the superstar fighter and Golden Boy.

Friday’s declaration certainly lends credence to that claim. Now that it’s out in the public, he’s prepared to move on with his career—for now, still with Golden Boy but undoubtedly on his terms and with his full involvement moving forward.

“For my part I will continue as always,” promised Alvarez, vowing to do so “..with discipline and desire to continue to be triumphant.”