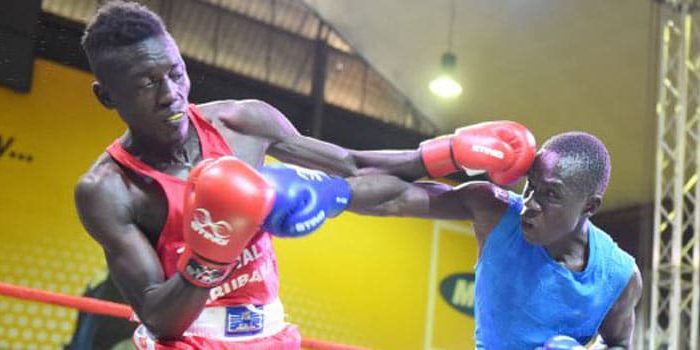 After Isaac Masembe outclassed Cape Verde’s Carlos Wilson Semedo 5-0 in the men’s featherweight quarterfinal, Jalia Nali lost the women’s featherweight by the same margin to Mali’s Fatouma Camara. Masembe became the second Ugandan to enter the medal bracket, having controlled the fight from the start, to win the judges’ scorecard 5-0 against the Islander at Al Amal Indoor Sports Center.

Semedo opened the cut below Masembe’s left eye, carried from the previous 5-0 victory over Congolese Rocky Bukasa but the Ugandan never despaired.

“My confidence was better today than in the first fight but all that is down to my faith in God,” Masembe, who wears a rosary over his shirts, said after the bout. The 19-year-old cornered Semedo for nearly 30 seconds in the first round but with the wound open, he threw punches with caution in the second round.

“The cut is affecting me a lot so I can’t attack like before so I have to be smart,” Masembe remarked.

In the final round, Masembe’s footwork was pivotal and Semedo’s jabs often missed him. The Ugandan finished off in style with fine connection and will now meet Algerian Oussama Mordjane in the semi-final tomorrow. Mordjane defeated Gabonese Franck Mombey 3-2.

Two years ago, Masembe upset 2014 Commonwealth Games boxer Nassir Bashir en route to winning the national bantamweight title at 17 years. But he was denied a chance to represent Uganda at the Africa Boxing Championships in Congo-Brazzaville because he was underage. His other victim Geoffrey Kakeeto filled the slot and went on to win silver. Now eligible, Masembe is assured of at least a bronze medal like lady Bomber Hellen Baleke who got bye into the middleweight (75kg) semis. He however, he has bigger goals in Rabat. “Bronze is not satisfying,” Masembe said.

This paper understands that this exuberant Bomber always trains in the night in Rabat after his bouts and sometimes, coach Mohammad Hassan has begged him to rest.

“We came here as a team trying to win gold and that hasn’t changed. With God all my prayers will be answered and I keep praying. I wish the entire team luck because we all want gold for our country,” he added.