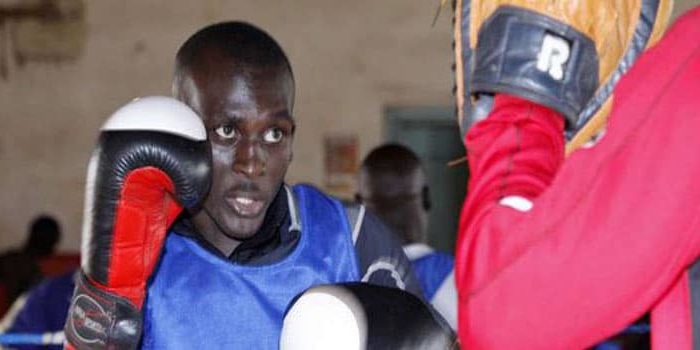 Bakari became the first Kenyan to reach the final in boxing at the Africa Games since light flyweight Suleiman Bilali in 2007 Algiers when he outclassed Dawit Bekele (Ethiopia) 4-1 in their semifinal contest on Wednesday.

Bakari will now face Rajab Otukile Mohammed from Botswana in the final on Thursday. Mohammed edged out Mohamed Flissi in the other semifinal.

However, Kenya’s Cosby Ouma and Elly Ajowi lost to Moroccans Tarik Allali and Youness Baalla 5-0 and 4-1 in their middleweight and heavyweight semi-final bouts.

Ouma and Ajowi now settle for bronze medals just like their compatriots Boniface Mogunde (Welterweight) and Fredrick Ramogi (Super heavyweight), who had earlier in the day lost their semifinal bouts.

It was a great and improved show from the Hit Squad that is handled by Benjamin Musa and David Munuhe, winning four bronze medals with either gold or silver in the offing from Bakari.

Kenya won two bronze medals from 2015 edition held in Congo Brazzaville and a bronze from 2011 event in Maputo, Mozambique.