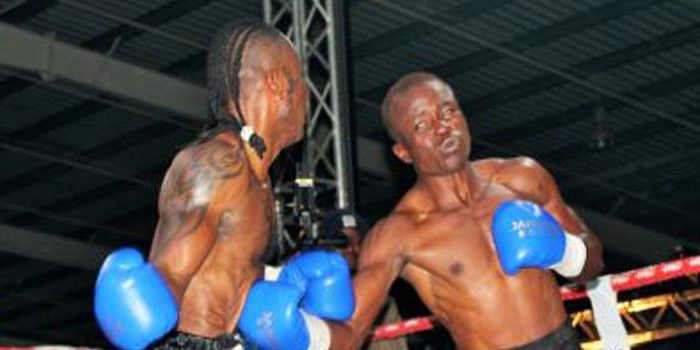 The victory also exorcises the demons that had haunted many-a-Zimbabwean boxers inside the Namibian ring as the Epworth-raised pugilist brings home to the Zimbabwean boxing cabinet its most prized trophy.

Pambeni, who travelled to the “land of the brave” carrying an underdog tag, turned on the heat to snatch the once vacant title from the grip of “Danny Boy”, who himself is a three-time IBO continental and WBF inter-continental champion.

Add such an impressive resume to the fact that he was also fighting before his home crowd and you have the stakes highly piled in favour of Felesianu. But, alas, “The Sniper” literally shot convincing jabs from the hip to convince all the three judges who scored in the Zimbabwean boxer’s favour.

True to the adage that perseverance pays, it was a deserved victory for Pambeni who for a whole decade had given up the sport he so loved in mourning. But like the typical old wine that gets better with age, he dusted himself up at 29 to begin a journey that has put his country on the African boxing map.

Apart from the WBA-Africa title loss to Bongani Mahlangu in Bloemfontein, South Africa, back in 2008, “The Sniper” had also had a shot at the IBF featherweight title in Kampala, Uganda, but was beaten by Ugandan Abdul Tebwazwala.

The grave mistake the then handlers of this once promising starlet (Juluka Boxing Club) may have made was throwing him right into the deep end. But with both age and experience, he has risen like a Phoenix to make his shanty and populous township of Epworth worth mentioning when it comes to sport.

Namibia has corporates pouring more money into boxing than soccer, a reason why it probably has the highest number of world champions, and perchance with the latest achievement by this poor boy from “Epaton”, locals may also begin to consider giving a hand to the sport of boxing.