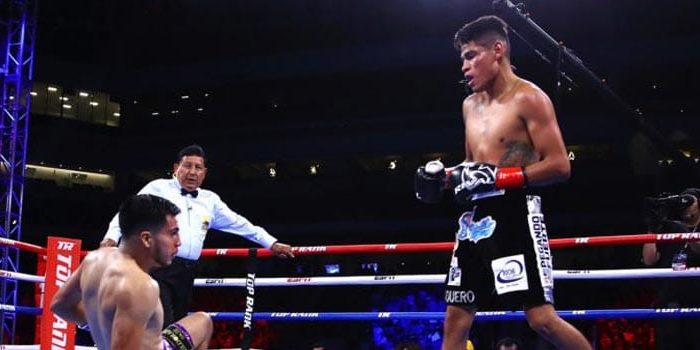 Emanuel Navarrete continues to plead his case as the worst kind of threat in the loaded super bantamweight division.

Navarrete scored a knockdown in round two and was merciless in his follow-up before the fight was stopped at 1:54 of round three.

The power difference was as evident from the opening bell as appeared to be the case on paper. Navarrete walked through the punches of de Vaca, who’s stopped just 33% of his opponents heading into his first career title fight. The defending titlist tagged his unbeaten but overmatched challenger with right hands without any fear or regard of the incoming.

That level of bravery and confidence in his own skills and power led to the bout’s first knockdown coming midway through round two. De Vaca came in with his hands held high but not tight enough to serve any real purpose. Navarrete planted his feet, connecting with a left and right uppercut before finishing the sequence with a sweeping right hand across his opponent’s chin.

Navarrete sensed blood in the water and moved in for the kill in round three. De Vaca was near defenseless as the defending titlist swarmed with an onslaught of power punches, though the one-sided action being allowed to continue due to the challenger fighting back just enough to avoid a stoppage.

It wasn’t going to last, though, as Navarrete never relented. De Vaca eventually did, unable to keep his overwhelming foe off of him. Referee Raul Caiz sensed as much, stepping in to the stop the contest.

De Vaca’s first career title fight results in his first defeat as he falls to 20-1 (6KOs).

Meanwhile, Navarrete remains a hot commodity. Saturday’s feat gives him 23 straight wins as he improves to 28-1 (24KOs). His next one could come as soon as four weeks from Saturday. Hall of Fame promoter informed the 24-year old that he is a strong candidate to land on the undercard of the September 14 ESPN+ card in Las Vegas, topped by unbeaten heavyweight Tyson Fury.

The bout aired live atop an ESPN-televised doubleheader.