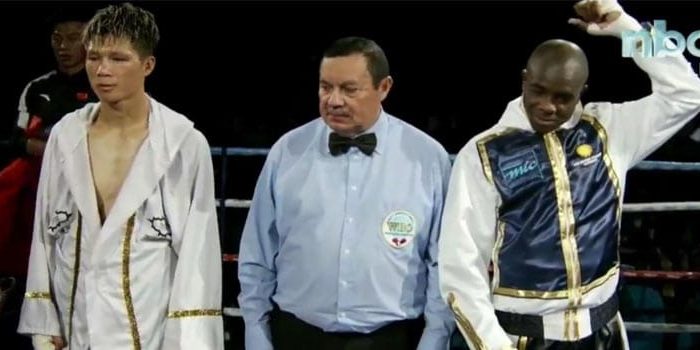 Namibia’s Mikka Shonena used precise leads and counters to beat Youli Dong from China via 12-round unanimous decision at the Ongwediva Trade Fair in the north on Friday night.

The fight, dubbed “The Battle: Namibia vs China,” took place under the banner of MTC Nestor Tobias Sunshine Boxing and Fitness Academy, will help push Shonena toward a world title shot. He is currently ranked number-five at welterweight by the WBO.

The two fighters went toe to toe from the opening bell, with each having their moments. In the third, a powerful right from Dong deposited Shonena on the seat of his trunks, to the shock of his fellow Namibians ringside.

But Shonena showed heart, gamely rising and working his way back into the fight. He got stronger as the fight progressed, slowly breaking Dong down. The gritty boxer from China was spent force during the latter half of the fight as his punches lost steam.