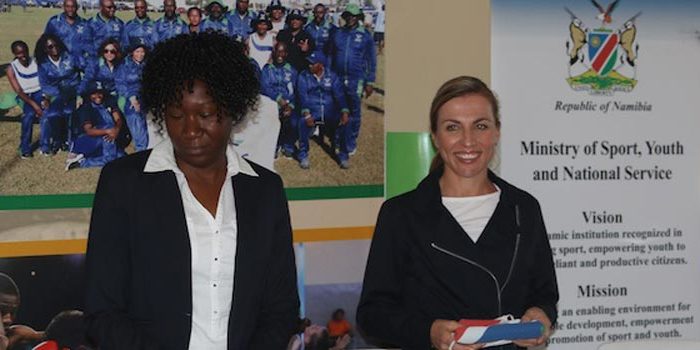 A poorly represented Namibia boxing team for the Africa Games in Morocco was sent off by deputy minister of sport Agnes Tjongarero on Friday.

Namibia will be represented by 56 athletes and 15 officials in 10 codes at the Africa Games which will be held in Rabat, Morocco from 16 to 31 August, but only two cyclists managed to attend the farewell on Friday, while Tjongarero also bemoaned the lack of importance attached to the sendoff by the government.

“This issue of sending off athletes to the All Africa Games has become unfortunate. We used to have a presidential send off where the President handed over the flag, but now its been relegated to the deputy minister. Namibia, please, we have to change – let’s find a way we can put this at the level its supposed to be,” she said.

“In most other countries their presidents send their team off, so let’s find a way that we can do the same,” she added.

This year’s Games will see a record turnout of about 7 000 athletes from 54 nations, while Morocco will be competing for the first time since 1978, after which they were banned from the games following a long standing territorial dispute over Western Sahara.

In 2017 Morocco signed a treaty with the African Union and pledged to return to the games and last year they agreed to step in as the hosts, after Equatorial Guinea withdrew due to financial constraints.

The Africa Games will also serve as an Olympic Games qualifier in 15 disciplines, while some rising stars in various sport codes are bound to leave their mark at the games.

“We don’t have much money, also due to the drought situation, but despite difficult economic circumstances the government has managed to fund the team’s participation. We are not going to make up the numbers we are going to compete and we want medals,” Tjongarero said.

The 12th edition of the Africa Games which will see 29 different sporting codes in action.

Chess and tennis were late withdrawals from the Namibian team, after their athletes did not meet the required standards to compete at the Games.