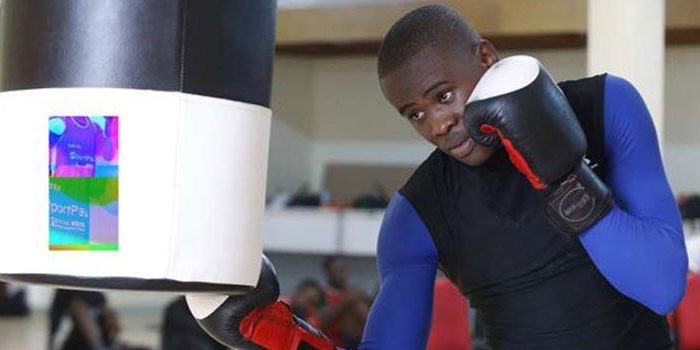 When 23-year-old Kenya Police constable George Cosby Ouma steps into the ring for the biggest fight of his life at the African Games in Morocco, advice from his father will linger in his mind.

Cosby, a middleweight boxer who will represent Kenya at the 12th edition of African Games, is among the three pugilists who will making their debut at the international stage.

The other debutants at the continental stage include Ethan Maina (lightweight) and Boniface Mugunde (welterweight).

Ouma’s dad, Joatham Onyango, was a boxer in his heydays at the lakeside town of Kisumu.

He added: “I want to make my dad and mum Everlyne proud by winning a gold medal in Morocco. They have been my pillars of strength since they always advise me on how to become a good boxer.”

Ouma followed his dad to the gym ever since he was young and remembers saying: “I want to actualize my dad’s dream.”

The Kisumu Day High School alumnus has been consistent in the domestic league winning all his games with a unanimous points decision.

“From the beginning of this year I set a target of flooring all my opponents and that is why I went flat out to win my bouts in the Busia, Nakuru and Mombasa legs. My aim was to represent Kenya at the African Games,” said Ouma.

Ouma, who started boxing under the guidance of retired boxer Lawrence Jaoko in Kisumu, says he will not let down his country and coach Jaoko.

“I am indebted to coach Jaoko for his dedication to sharpen my skills and to instil confidence in me that I can make it,” said Ouma.

Boxing Association of Kenya (BAK) competition secretary John Waweru, who doubles up as a national team coach, is impressed with the young boxer and says he has what it takes to excel at the African Games.

“I like Cosby. He is a good boxer and if he maintains discipline inside and outside the ring he is going places,” said Waweru.

As he steps up his final training at Kasarani, Ouma says he is now working on sharpening his uppercut and left punching skills.

“My guard is now water tight, what is remaining is to ensure my uppercuts and left hooks are perfect and hit the target,” said Ouma who is a great admirer of Ukrainian lightweight world champion Vasiliy Lomanchenko.