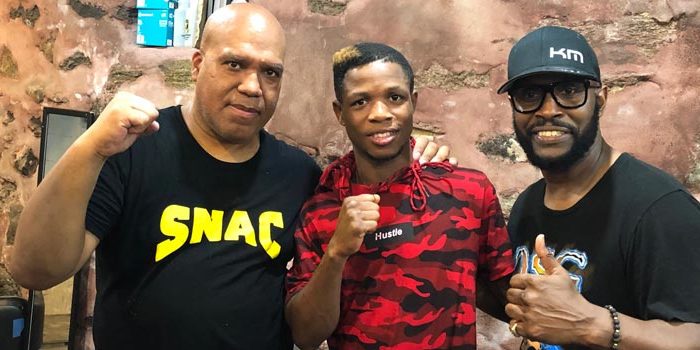 On a corner in the heart of Brooklyn’s Bedford-Stuyvesant neighborhood sits a tiny French bakery. A decade ago, it would have looked out of the place in an area that birthed Big Daddy Kane, The Notorious B.I.G. and Jay-Z. Today, it’s simply another sign of the borough’s gradual metamorphosis.

Across the street from the bakery, inside a brick-walled gym hidden from curious passersby, Duke Micah is undergoing his own changes.

On Saturday, August 31, Ghana’s Micah (22-0, 18 KOs) returns to the ring versus a to-be-determined opponent at the Armory in Minneapolis, Minnesota. The card, headlined by a world title bout between Erislandy Lara and Ramon Alvarez, will be Micah’s first under Al Haymon’s Premier Boxing Champions (PBC) banner.

The magnitude of the opportunity isn’t lost on the undefeated bantamweight, who was previously signed to the now defunct Real Deal Promotions.

“I just have to give a big thanks to God,” said Micah during a sit-down with BoxingAfrica.com. “Also, to my team. My manager, Michael Amoo-Bediako, has stood like a father for me. So, I thank God that he has brought me to PBC.”

The “Baby-faced Terminator” moniker still applies, but Micah is now a matured, 27-year-old boxer. It’s been 14 months since he last stepped in the ring. That night, he won a 10-round split decision over unheralded Thomas Snow in front of a small crowd at Kings Theater in Brooklyn.

It was his second fight in the US; his second straight lackluster performance.

This wasn’t the Micah who captained the Ghana national squad at the 2012 Olympics. The one who climbed to 19-0 with a gut-check win over Matthew Chanda in London.

After turning pro in 2012 and tearing through local opposition, Micah moved his training camp to the UK in 2016.

He stopped three consecutive opponents prior to the hard-fought decision over Chanda. Then, he set his sights on America.

Micah looked unremarkable in his stateside debut, a 10-round majority decision over journeyman Jose Santos Gonzalez in November 2017. He followed that up with an even sloppier performance versus Snow.

One faction claimed Micah was simply too volatile, struggling to adjust to life in the US.

Another believed the once-promising talent wasn’t being given the necessary tools to succeed.

Either way, change was needed.

“When I first came to this gym, I didn’t know anyone but my friend, Richard,” Micah recalled. “But once I got to know everyone, and began training with them, I realized that this is a real gym. This is where I needed to be so that changes can come.”

But there was still the matter of securing a bout. As Real Deal Boxing stopped putting on shows, Amoo-Bediako sought a release for Micah. Working with manager/adviser Keith Connolly, they found a slot for Duke on the August 31 PBC card.

Micah is a mainstay at the gym. Nearly every person that walks through its doors asks, “Where’s Duke?”

Today, Amanda Serrano, a seven-division world champion and one of the greatest women boxers of all time, invites him to spar. He obliges but seems more interested in flaunting his much-improved defense than attempting to hit Serrano—despite pleas from Serrano’s corner to treat her as if she were a male boxer.

If Micah is holding back, Serrano isn’t. She forces Duke to respond with power punches as onlookers playfully cheer them on. The fighters embrace afterward.

Nevertheless, there has been backlash from the Ghanaian community regarding the issues that led to Micah revamping his team—and Amoo-Bediako’s methods.

“When someone comes along and changes the way things are done, people don’t like it,” the UK-based manager shrugged. “When they become successful, rather than swallowing their pride and maybe joining forces, they try closing the door on us and hope we fail. 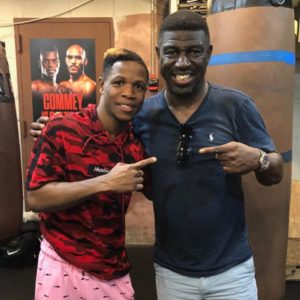 “It’s up to them to change their mindset. If they don’t, it’s not going to bother me. I’m still going to do what we’re doing with Richard and Duke, with Streetwise Foundation and we’re going to continue to raise the flag of Ghana high across Africa and the world.”

Micah notes the negativity but is unperturbed.

“One thing I want to tell Ghanaians is not to believe everything they hear, but to see what is happening,” he said. “Let me deal with whatever issues they have been hearing about. Good things are coming. I believe just as my manager did for Richard Commey, he can deliver a world title shot for me and I will make Ghana proud.”

Micah is still a long way from realizing his dreams. Yet now more than ever, he’s well-positioned to do so.

As today’s gym session ends, Micah heads to the bakery across the street, where he eyeballs a high-end brand of chocolate milk before purchasing it. It’s a far cry from the starch-heavy Ghanaian restaurant he frequented when he trained out of the Bronx.

“Trying something new,” he smiles as he looks around the store, taking in all the changes that have encompassed him.