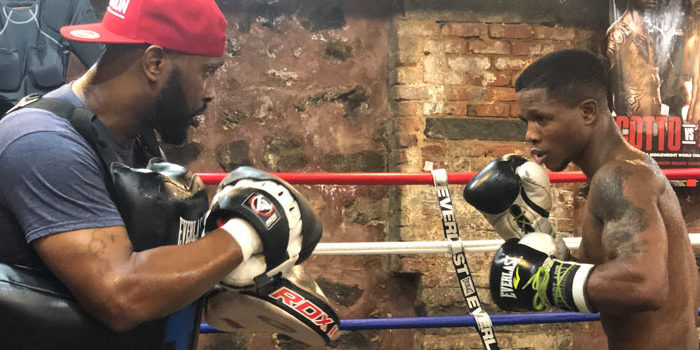 The 26-year-old Cruz (13-1, 7 KOs) is no stranger to the world class level, having lost to current WBA World Super Bantamweight Champion Brandon Figueroa in August 2018. The Mexican stays busy, winning a quick four-round unanimous decision over Sixto Candela on August 15.

Micah (22-0 (18 KOs), on the other hand, hasn’t fought in 14 months, when he won a 10-round split decision over Thomas Snow. The former Ghanaian Olympian has undergone several changes since, leaving Real Deal Promotions and switching trainers from Lawrence Carl Lokko to Andre Rozier and relocating to Brooklyn.

According to the 27-year-old boxer-puncher, he feels rejuvenated.

“In my old fights, sometimes you’ll see that the way I want to perform is not the way I’ve been training,” Micah told BoxingAfrica.com. “Everything must be put in practice before you can do it in the ring. I’m sorry to say, I’m not a magician. Sometimes, they would tell me to do something but because I haven’t practiced it, I can’t do it. I thank God for bringing me to this gym.”

Micah points to current IBF World Lightweight Champion and fellow Ghanaian Richard Commey as a source of inspiration. Commey, who also trains with Rozier, won his title last February and is preparing to make his second defense on December 14 versus mandatory challenger Teofimo Lopez.

It wasn’t easy. Initially, Micah pressed his manager, Michael Amoo-Bediako, to secure a fight date for him. But after a few sparring sessions at his new gym, the boxer realized there was much more work to be done.

“Mr. Mick told me to be patient,” Micah said. “Someone else would have said, ‘Okay I’ll find you a fight.’ They don’t care. But you want it and you are not ready.

“Then I was in the gym one day and they brought a young guy in for me to spar. It made me realize that I was not ready. Anybody can surprise you so you have to be ready. Now I feel I’m ready.”

While Micah’s technical improvement has been lauded, he is quick to point out those aren’t the only changes.

“There were some people who were trying to bring everything down – all the work we had done. To finish everything. But with God all things are possible.

“My mind is relaxed now. My thinking in the ring is all about boxing now, no distractions. And I’m seeing all the changes, mentally, physically, my conditioning and I am enjoying who I am working with.

“I’ve been through a lot of problems and it wasn’t easy. But boxing is my gift and God gave me the gift so if I went away from boxing, God would punish me.”

The Cruz bout is scheduled for 10 rounds. It will also be Micah’s first on Al Haymon’s Premier Boxing Champions (PBC) television series.

“I have to give a big thanks to God, Mr. Mick and Uncle ‘Dre,” he said. “I thank God for being with PBC because good things are coming my way. PBC is now reigning when you speak about boxing and I can see it.