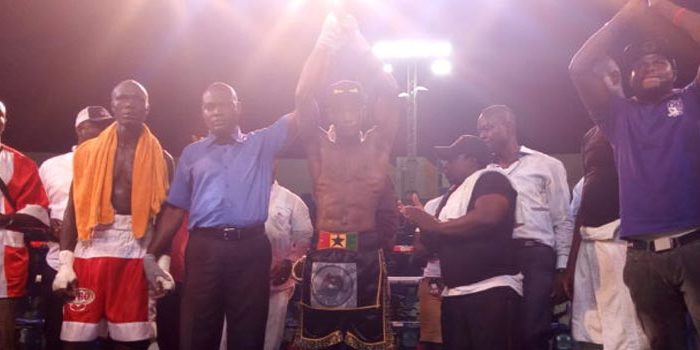 Patrick Allotey’s first career title fight cleared a major hurdle on Saturday, although at the expense of those who were looking forward to seeing him in the ring on Saturday.

A card scheduled to take place in Allotey’s native Accra, Ghana was canceled on Saturday morning, citing “some unfortunate health issues that has brought to our attention by the technical team with regards to the main bout on the fight card,” according to Gideon Oyiadzo Jingles, project manager for Cabic Promotions.

Allotey was due to face Congo’s Eric Kapia in a 12-round regional super welterweight title fight atop the eventually scrapped bill.

“We regret to announce the postponement of Cabic Big Fight Night III scheduled originally to come on today. Saturday 10th August 2019 at the Accra Sports Stadium,” noted Oyiadzo Jingles in addressing the bad news to local media mere hours before the show. “The outcome is rather unfortunate given our heavy investments, the very high expectations as well as a successful ‘weigh-in ceremony’ held at Idrowhyt Event Centre yesterday.”

The development amazingly coincided with confirmation that Allotey (40-3, 30KOs) will challenge for the World Boxing Organization (WBO) 154-pound title versus Mexico’s unbeaten Jaime Munguia. Their bout is set to headline a Sept. 14 DAZN livestream from Dignity Health Sports Park in Carson, Calif., in honor of Mexican Independence Day.

The bout was formally announced on Saturday, although it still requires clearance from the WBO championship committee.

With the event five weeks away, Allotey was required to win and escape unscathed on Saturday in order to preserve the career-best opportunity.

That is no longer an issue, which interestingly applies to another bout scheduled for the card. Unbeaten heavyweight Ebenzer Tetteh (19-0, 16KOs) has been named as the suggested opponent for a Sept. 21 clash versus England’s Daniel Dubois, which is seemingly in the clear since his fight with Kenya’s Morris Okolla (11-3, 9KOs) was also scrapped.

The statement from Cabic Promotions suggested that the show as a whole will be rescheduled, although it apparently only applies to the card’s Big Fight Night III title.

“We are however eternally grateful to the media and all stakeholders for the support and partnership in our quest to create world champions for mother Ghana,” stated Oyiadzo Jingles. “A new date shall be announced soon after deliberations with all stakeholders.”

Allotey carries a six-fight win streak into his first title fight. The 31-year old from Accra fights in the United States for just the second time in his career. His lone other trip resulted in April 2015 2nd round knockout loss to Patrick Teixeira. He is 1-3 overall outside of Ghana.

Munguia (33-0, 26KOs) attempts the fifth defense of the WBO title he claimed just last May. His most recent win was hotly contested, claiming a 12-round decision over Dennis Hogan in an April fight whose outcome was met with protest and a thorough review by the WBO.