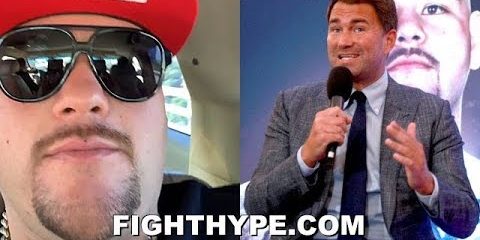 Unified World Heavyweight Champion Andy Ruiz Jr. says the rematch versus Anthony Joshua will not take place in Saudi Arabia, despite reports to the contrary.

Ruiz broke his silence during a live chat on Instagram Tuesday evening, accusing Joshua of being “scared” to fight him.

“Why do you think he’s over there trying to make the fight in Saudi Arabia?” Ruiz asked.

Joshua promoter Eddie Hearn of Matchroom Boxing held a press conference in the UK on Monday, announcing that the rematch would occur on December 7 in a yet-to-be-erected venue in Diriyah, Saudi Arabia.

However, the press conference raised concerns as neither fighter was in attendance and Ruiz had not confirmed these details. Ruiz, the Mexican-American nicknamed “The Destroyer” wrested the titles away from Joshua last June, dropping the previously undefeated Brit three times en route to a seventh-round stoppage at Madison Square Garden in New York.

The victory spoiled Joshua’s U.S. debut. Initially, Hearn said that Joshua wanted the rematch in New York again to right the wrong of the first fight. Joshua contradicted those statements two weeks ago, telling members of the media that he preferred the bout be staged in Cardiff over in his native UK.

The choice of Saudi Arabia was meant to be neutral, but it appears Ruiz has concerns over the fight taking place in a country that has no boxing commission and a human rights record that many deem troubling.

Even so, Hearn told reporters that Ruiz had no say in the choice of venue and that he had already signed off on the rematch.

“Both fighters have signed for this rematch and all governing bodies have been informed.

“There was a lot of talk about where this fight would be held but we wanted to go somewhere who believed in the sport of boxing and had a vision.

“There is another world outside of Cardiff and Madison Square Garden and we have an obligation to grow the sport of boxing in new areas and regions.

But recent reports reveal that Ruiz has not been given a new bout agreement and that Hearn was referring to the contract Ruiz signed prior to the first bout. It appears Ruiz has more say than initially thought.

“I know everybody’s talking about the fight and all but we got the real news coming soon,” said Ruiz during the IG live stream. “The fight is going to happen soon. I’m trying to give hope, give motivation to all my people.

“Of course. It’s going to be on my terms, our terms. We’re going to bring it back here in the United States.”