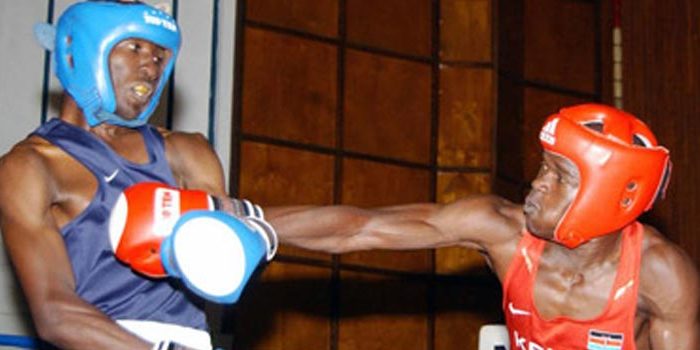 Having become the first African boxer to win an Olympic gold medal, at Seoul in 1988, the late Robert Wangila’s status as Kenya’s finest boxer has long been assured.

Wangila ruled the local welterweight scene like the proverbial Colossus and dominated the weight category with little opposition before his untimely death in 1994 at just 28.

The person who inherited the heralded boxer’s welterweight mantle is Absolom Okinyi, a former national team member who, like Wangila, boxed for the Kenya Police Boxing Club during his heyday.

Described in local boxing circles as Kenya’s best welterweight of his time, Okinyi, who won silver at the 1998 Commonwealth Games in Kuala Lumpur, told Xinhua that the standards of boxing in the east African nation have taken a nose-dive.

“Boxing is not where we left it. The sport is barely recognizable, unlike in the past when we had a vibrant national league with many clubs in contention,” the 44-year-old said on Sunday.

Okinyi joined the sport in 1989 as a lightweight in the 60kg category and climbed the ladder up to the welterweight category, where he boxed until his retirement in 2008.

The elder brother of boxers Edwin Okongo and Nick Okoth, Okinyi was born and brought up in Nairobi and attended schools in the city.

“I boxed and studied at the same time. Immediately after high school, I joined the Kenya Police in 1995 and graduated in 1998,” said Okinyi, adding that upcoming boxers should put their education first.

He joined the national team in 1997 and immediately won gold during the Brunner Urafiki tournament, which featured teams from Kenya, Uganda and Tanzania, and later went on to win the East Africa Championships in Tanzania and the Zone 5 tournament in Egypt.

“In early 1998, I won all my bouts including against Tony Cesay of England and a Russian during an international competition in Denmark. The improvement made me perform well during the 1998 Commonwealth Games in Kuala Lumpur where I won the silver medal,” he noted.

During the 1999 All Africa Games in Alexandria, South Africa, Okinyi lost in controversial circumstances to a local fighter.

“I was robbed of victory. We tied at 99 points each, but the judges decided to award the match 100-99 in favor of the South African for reasons I leave upon you to interpret,” he said.

In 2002, Okinyi had a more memorable outing, winning the gold medal during the East African Championships held in Tanzania.

During the Commonwealth Games held in Manchester that same year, Okinyi drew on 99 points against a boxer from Scotland, and in an episode akin to the South African snafu, the Scot was awarded the bout after a 100-99 decision by the judges.

“Such decisions are the reason some boxers go flat-out to knock out their opponents in order to leave nothing to chance,” he said.