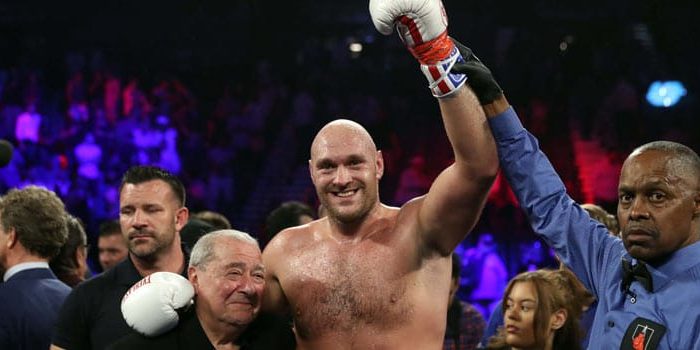 The list of potential dates and sites for Tyson Fury’s next fight is now smaller than his list of possible opponents.

BoxingScene.com has been informed by multiple sources that Fury will fight either September 14 at MGM Grand Garden Arena in Las Vegas or September 21 at TD Garden in Boston. His opponent likely will be chosen by the end of this week.

Promoter Bob Arum’s initial plan for Fury (28-0-1, 20 KOs), who’s co-promoted by Frank Warren, was for him to fight at Madison Square Garden sometime in October. Now that the unbeaten Brit will return to the ring sooner, Arum’s matchmakers are trying to lock down an opponent.

Numerous heavyweights have turned down Top Rank’s offer to fight Fury. Others were deemed unavailable because they’ve fought recently or already have fights scheduled.

Whomever the 6-feet-9 Fury fights, the second bout of his contract with Top Rank and ESPN will be streamed live by ESPN+, the cable giant’s streaming service.

If Fury wins his next fight, the former IBF /WBA/WBO champion is expected to challenge WBC heavyweight champ Deontay Wilder (41-0-1, 40 KOs) in a rematch early in 2020. Their second fight also is contingent on Wilder defeating Cuban contender Luis Ortiz (31-1, 26 KOs, 2 NC) in their rematch, which is expected to take place at some point in November.