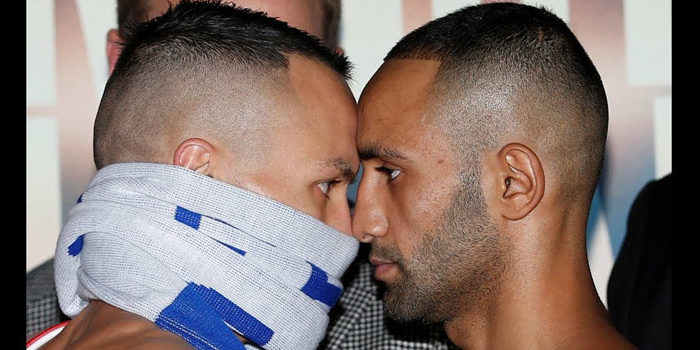 The pair of unbeaten featherweights wrapped up a contentious promotional buildup to their forthcoming title fight with yet another intense exchange. The latest came following Friday’s pre-fight weigh-in, where both easily hit the mark for Saturdays’ featherweight title fight in Warrington’s hometown of Leeds, England.

As has been the case throughout the promotion, the latest face-off between combatants ended with Warrington getting directly in Galahad’s face. The two exchanged harsh words as the defending titlist pressed his forehead against that of his challenger and pushing forward before being separated by local commission officials.

Warrington returns to his Leeds hometown for the 10th time in his past 12 fight, nine of which will have come at First Direct Arena come Saturday evening. The 28-year old local hero won his title in his hometown last May, scoring a rousing 12-round decision over Lee Selby to begin his title reign.

Galahad’s rise to the title stage hasn’t been anywhere nearly as glamorous.

The 29-year old Sheffield native by way of Qatar saw his transition from prospect to contender interrupted by an initial two-year ban after testing positive for the banned substance stanozolol following a 12-round win over Adelison dos Santos in Sept. 2014.

His contention all along was ingestion through a tainted beverage, an alibi which gained sympathy from the United Kinddom Anti-Doping (UKAD) agency which shaved six months of his suspension. Galahad resumed his career in April 2016, having won eight straight including six consecutive knockouts.

The run also included his invitation to title contention, claiming a 12-round win over Toka Kahn Clary in their title eliminator last October in Boston, Mass. The event marked his first career fight in the United States, returning home to Sheffield for a stay-busy win over Brayan Mairena last December while awaiting word of his first career title fight.

Adding to the fighters’ rivalry is the long-standing history between their respective promoters. A victory of sorts was claimed by Frank Warren, Warrington’s promoter whom outbid domestic promotional rival Eddie Hearn—whose Matchroom Boxing outfit has guided Galahad’s career—as the fight went to a purse bid hearing earlier this year.