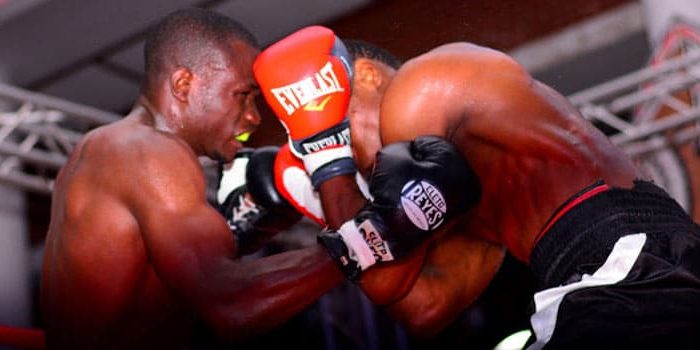 Newly crowned Africa Boxing Union (ABU) middleweight champion Rayton Okwiri believes he is now ready to work his way up the list of contenders in his quest for global titles.

The Olympian, who joined paid ranks after his 2016 debacle in Rio, delivered a scintillating flurry of punches which sent Tanzanian opponent, Hussein Itaba, crashing onto the canvas.

The win earned him the vacant ABU belt which now improves his chances of fighting in Europe, America and Asia.

Referee Steve ‘Vedo’ Okumu stopped the proceedings after the Tanzanian failed to beat the count of 10. Itaba went to his knees and couldn’t recover the thunderous onslaught.

The 10-round scheduled title contest ended on the 78th second of the third round. Okwiri pinned the Tanzanian at a corner to delver his killer antics. From the first Hong, Boom Boom fought as though each shot was to be the last.

“I realised he had heavy punches and with his massive physique, he threw heavy punches. The essence was to weave, bob and duck and I also frustrated him with some body shots in the initial stages,” said Okwiri.

Prior to the flurry, Okwiri chased Itaba, caught him with a few hooks then nailed him at a corner and the visitor had definitely seen enough before the stoppage.

“I’m now the African champion with just five fights. Now I’m ready to face global contenders in my weight. I will be challenging for the World Boxing Council (WBC) title next year and should this come to fruition, then I will be rated among the contenders for the world title and this is what we shall be working on this year. I might fight once or twice locally or outside the country in the run up to the WBC big day,” Okwiri, who plied his trade in the now defunct AIBA Pro Boxing (ABP), said of his fight plan.

Mwangi, however, claimed he was robbed of victory. “I had more of the fight. I handed him scares on many occasions and I’m surprised the judges thought otherwise. I respect the judges decision but I believe they can do better,” Mwangi fumed.

In a women’s super lightweight bout, Judy Waguthii demolished Tanzanian Asha Nzilani in the 23rd second of the third. Referee Leonard Wanga stopped the proceedings to save the Tanzanian from further punishment.

Like Okwiri, Okolla, a product of Dallas Muthurwa production line, received the wildest cheers on the night in the event promoted by Main Events promotions. In attendance were several former Kenyan international boxers including Olympians Benson Gicharu and Suleiman Bilali as well as Fatuma Zarika, the world super bantamweight WBC champion.