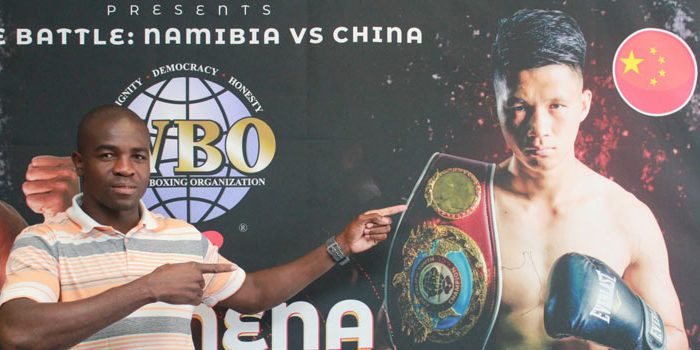 With the luck of Namibian boxers slowly diminishing on the American and European boxing frontiers, award-winning local boxing promoter Nestor Tobias has now turned to the east and looks to make a lasting impact on the eastern boxing sphere.

The MTC Nestor Sunshine Boxing & Fitness Academy yesterday announced that one of its treasured fighters Mikka ‘Silent Assassin’ Shonena is set to headline The Battle: Namibia vs China Boxing Bonanza slated for the northern town of Ongwediva on August 24.

The bonanza, which will also see other top local boxing stars in action alongside Shonena, will be part of the annual Ongwediva Trade Fair and is aimed at bringing a blaze of entertainment to the fair’s festivities.

The 31-year-old Shonena, who is the current WBO Africa welterweight king and remains undefeated, will put his prized continental title at stake when he faces China’s Youli Dong, who is the reigning WBO Asia Pacific Youth welterweight champion, in the main fight of the night.

Rated No. 5 on the WBO world rankings, Shonena will face the Chinese fighter in probably the biggest fight of his career and if the Namibian losses this fight to Dong, his WBO Africa welterweight crown will become vacant and he will drop in the world rankings.

But if he wins, he will retain his title and shoot up on the world rankings and possibly move within touching distance of much bigger fights in this highly competitive division.  The same scenario applies for Dong, as a defeat against Shonena will see his title become vacant and him dropping in world rating, while a victory will play out to the contrary.

Shonena holds a record of 14 wins from the same number of fights as he remains unbeaten, while the 24-year old Asian on the other hand boast a record of 13 wins, one loss and one draw from a total of 15 professional fights.