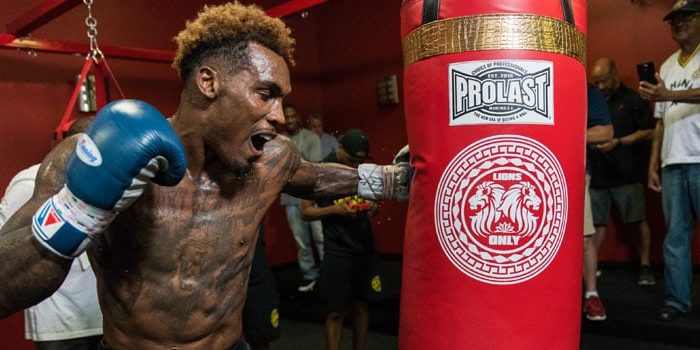 Unbeaten interim WBC Middleweight Champion Jermall Charlo hosted a media workout Wednesday as he prepares for his title defense against Brandon Adams in the main event live on SHOWTIME Saturday, June 29 from NRG Arena in Charlo’s hometown of Houston.

Charlo last fought in Houston in 2012 in just his ninth professional fight and will be headlining in his hometown for the first time on June 29.

Here is what Charlo and his trainer Ronnie Shields had to say Wednesday from Kinetix Fitness Center in Missouri City, Texas:

“Everywhere I go people tell me they can’t wait for me to fight. I’m starting to notice more people are catching on that boxing is about to be here in Houston and it’s going to be here for a long time because I plan on fighting here a lot more often.

“I got a game opponent in Brandon Adams. He’s going to come out to fight. Everything is on me, so I have to provide and put Houston on my back. I’ve been training well so I’m ready to go out and do what I do.

“This guy is coming to my hometown to fight me, so he’s going to prepare himself well and be at the top of his game. This makes me have to train a lot harder to do what I have to do.

“Ronnie Shields has done a great job of keeping me composed and I’m ready to build my legacy up just as well as his. He has a stable full of champions and I’m one of them.

“Ronnie is like a treasure to boxing, especially in the city of Houston. He’s trained here all of his career and I’ve done the same. I’ve gotten to see Ronnie train world champions, and now getting to be the world champion that he’s training, I know I’m in good hands for sure. He’s got my back and he’s like a father, coach and teacher to me.

“My family plays a big part in my career. They put a lot of pressure on me, so if the pressure is there, it’s coming from my family. I’m happy to be here, I’m happy to be in my home city, I’m happy to be fighting in front of Houstonians and giving them another world champion. We haven’t had one since the George Foreman days, so now it’s a new era of boxing and I want to be the face of it.

“I’ve worked so hard to get here from the amateurs, to winning the world title, to defending the world title. Now I’m back in the city of Houston getting the chance to put my career on the line and do it right here, it means more to me now than it ever has in my career.

“You always see me in hard fights that I dominate. I don’t take any competitor lightly. I’m out here training like I’m training for Canelo. Brandon Adams is going to be on his A-game. If he makes a wrong move, it’s going to be a short night for him. He’s going to bring the best out of me.

“The division is mine as long as I continue to do what I’m doing. I’m in a good place. I’m a force to be reckoned with in the 160-pound division.”

“Mentally I go over the game plan every day and every night. I still watch a lot of film and a lot of different fights. I’m focusing on all of the technical stuff that I know we have to do in the ring. Although we’re close to the fight, just a week left, we are just trying to make sure we are doing all the right things that it will take to make Jermall successful.

“The routine is basically the same every day. We have different techniques we work on. We are getting ready to go to Las Vegas for a couple days because I have other guys fighting as well as his brother. So we are going to continue training in Las Vegas just like we are doing here. Nothing stops. We are going to continue going over the game plan consistently and making sure he knows every aspect of what he is supposed to do.”