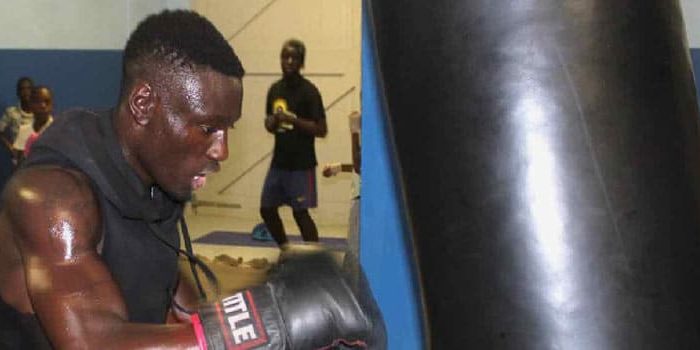 ABOUT 50 boxers from five to 30, men and women, black, brown and white, and amateurs and professionals, jam into a locker room under the Swakopmund Sports Stadium every evening to do something they love: to box.

They run, skip, lift weights, spar, punch bags and shadow-fight as music blares over a boom box. The small room is heavy with the heat and smell of sweat, but this does not deter them.

They love it. Most said it was fun, while others believe in the physical benefits in terms of strength and fitness. Others speak about learning self-defence, and then there are those who want to be like their trainers: professional lightweight boxing champion Albinius ‘Danny Boy’ Felesianu and amateur champion Jonas Jonas.

The club is also named after its founder and veteran coach and boxer, Albertus Tsamaseb, who was awarded the Namibia Sports Commission’s excellence award at last year’s national sports awards.

“We take our boxers from the grassroots, and develop them. We give them confidence, strength, and help them rise to the occasion. Many of them are poor, and we take them from the streets and help them make something of themselves,” said club manager Tangeni Amuthenu.

Many of this club participated in national championships, with Erongo emerging on top of all the regions. Last year was the same when the regional amateur boxing championships took place at Katima Mulilo, and Erongo won. Eight of the boxers are there now for this year’s championship at the same town.

“This year, we are defending champions, and are confident we will win again, and have our fighters selected for the national team that will fight in Russia in September during the world amateur championships. And then we prepare for the 2020 Tokyo Olympics,” enthused Tsamaseb.

Although the boxers, the coach and manager are proud of their club, there is a real need, which can only be met by businesses which will be sympathetic to their vision. What must be understood is that this is a real club established in 2002, and has delivered the goods for the past nearly two decades.

They depend on the charity of companies and supporters, but cannot expect it from their members who are school-going children, the youth, unemployed people, or those with limited incomes. But they are fighters in life, and need support.

One of the greatest needs, according to Amuthenu, is a proper venue.

“There have been promises, but nothing has come of it. We are serious. If we have a proper venue, and are able to get better equipment and gear, we will be able to do business. We will be able to involve more people, including the schools, to take up boxing as an extramural activity for a small fee. This will sustain the club to continue to develop champion boxers from the region,” he added.