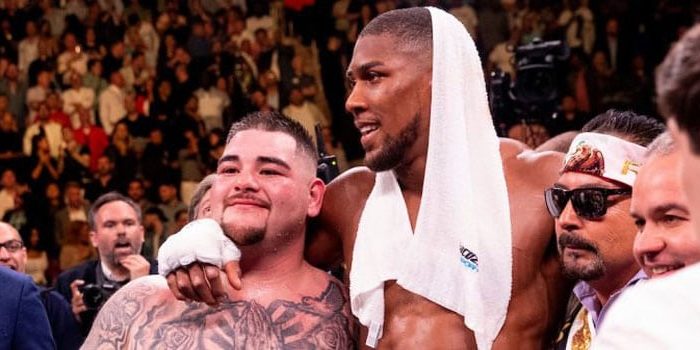 Promoter Eddie Hearn would prefer the fight in the UK but Ruiz is demanding £40m to cross the pond after his seventh-round stoppage of the former world champion.

Joshua was floored four times as his unbeaten record was shattered in New York last weekend to the Mexican underdog.

Hearn triggered that rematch clause and hopes Joshua and Ruiz will face-off in November or December, with a location decided in the next fortnight.

And the promoter told Fight Hub TV: “For me, we should take it to the UK.

“AJ’s the sick kind of guy where he said to me a couple of days ago, ‘you know maybe we should do it in the Garden [Madison Square Garden] again,’ I’m like – ‘WHAT?’ He went, ‘well that’s where it went wrong, so maybe that’s where I should put it right’.

“Wow that’s an incredible attitude, I said ‘for me, we don’t know if boxing in America was a disadvantage to you, boxing in the UK will be an advantage for you.’”

And Hearn is already fed up with Ruiz’ demands, with a £35m hike on his fee from the first clash if he fights in the UK.

He also wants to stage the rematch in his home country of Mexico.

Hearn said: “People say, ‘Ruiz should get where he wants it to go’. Ruiz got the opportunity, we picked Ruiz, he wasn’t mandatory.

“We will advise probably in the next two weeks where the rematch will be.”

But the 29-year-old Mexican, nicknamed the Destroyer, is ready to dig in his heels.

He said: “I’d love it to be here in the United States or in Mexico but it all depends on the team and what we negotiate.

“If they [Team Joshua] want me to go over there [the UK] they’ve got to give me 50 million dollars.”