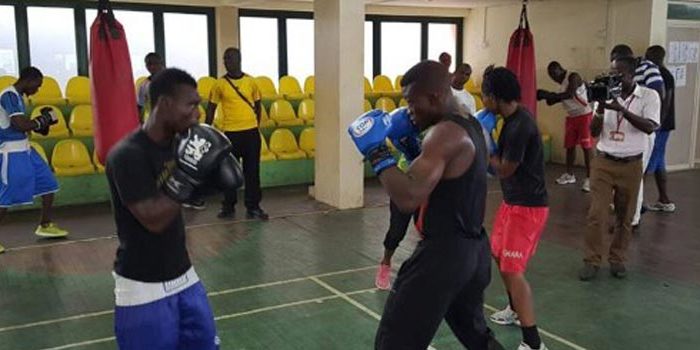 Assistant Head Coach of the national amateur boxing team, the Black Bombers, Daniel Lartekwei Lartey, has called for support from corporate Ghana as the team prepares for the upcoming Africa Games scheduled for Rabat, Morocco from August 19-31.

The team has been on non-residential camping at the D.G Hathiramani Sports Hall since December 2018, in preparation towards a tournament which will also serve as a qualifier for the Olympic Games in Tokyo.

In all, there are 41 boxers including eight females in camp.

In a chat with the Times Sports yesterday, Mr Lartey said the team was about 70 per cent ready for the games, adding that, the boys will reach top form by the time of the Morocco event.

But conditions under which the team has been training, he said, leaves much to be desired as boxers commute to and from their various homes to the stadium to train on daily basis.

Also, the training facilities as well as kits and equipment are not in the best condition.

According to him, the thought of always waiting on government to start camping often affects the team’s training, so they try to mobilise resources to get the boys to train.

“I know there are a lot of corporate bodies, boxing enthusiasts and well-wishers of the sport out there who can help us attain the ultimate goal of qualifying for the 2020 Olympic Games as well as return from the Africa Games with lots of medals.”

“I am appealing to corporate bodies out there, and the general public. We need support to transport the team to the stadium for training as well as kit them with the right equipment.”

For him, the idea of leaving everything to government was not the best.

Second Deputy Coach of the team, Vincent Akai Nettey, expressed belief in the boxers in camp, saying that when given the right preparation, they can qualify and win medals at the games.

He said the team was scheduled to host their counterparts from Nigeria to a three-day bilateral- training programme from June 27.

On whether the Black Bombers would be taking part in the impending West Africa Zone Two Boxing Championships taking place in Cape Verde from July 14-20, which has been earmarked as part of preparations for the Africa Games, Coach Nettey said they were yet to get any word on that.