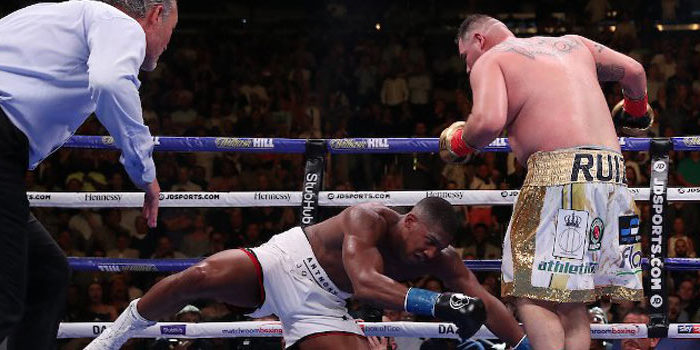 Top Rank CEO Bob Arum, who is the co-promoter of Tyson Fury, expects Andy Ruiz Jr. to once again come out on top when he takes part in a rematch with Anthony Joshua.

Back on June 1 at Madison Square Garden in New York, Ruiz shocked the world when he stopped Joshua in the seventh round to capture the WBA, IBF, and WBO world heavyweight titles.

Joshua was dropped four times before the contest was finally waved off by the referee.

Arum does not view that version of Joshua as the same boxer he witnessed in past fights.

Arum’s company had promoted Ruiz for several contest and he never viewed the Mexican heavyweight as a real puncher.

“He had no punch, no punch that had any real effect. The Joshua that I saw on June first at Madison Square Garden was an impostor, it wasn’t Joshua. It was somebody else. I don’t want to take anything away from Andy Ruiz, but from the way I look at it, he didn’t beat Joshua. He beat somebody else, I can’t lie about that, that wasn’t Joshua,” Arum told IFL TV.

Arum stands firm on his position that doing an immediate rematch is the worst decision that Joshua’s team can make.

“The stupidest thing they can do is to put Joshua back in with Andy Ruiz. Based on what I know about the sport, you’re gonna get the same result. This wasn’t as Rahman-Lewis, this was different. This is a guy that guy got knocked down four times by Andy Ruiz, who hasn’t the ability to knock down ham ‘n egg guys.”