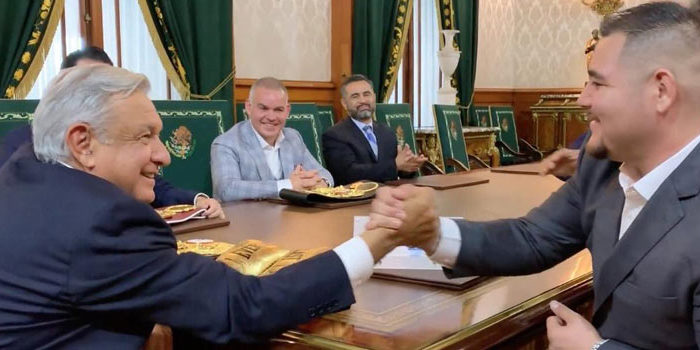 The boxer was embraced by a mob of fans and media at a press conference that was staged by local officials and promoter Fernando Beltran of Zanfer Promotions.

??? Andy Ruiz Jr hits the red carpet for a hero's welcome as he arrives for his first press conference in Mexico since beating Anthony Joshua to become the unified heavyweight world champion. pic.twitter.com/OooN5Y7TlJ

Ruiz was also honored by the President of Mexico, Andres Manuel Lopez.

Ruiz etched his name in heavyweight lore by TKO at 1:27 in the seventh round to become the surprise champ in a bout that had shades of Douglas’ upset over Mike Tyson for the heavyweight title in 1990. Ruiz barely was on anyone’s heavyweight radar when he was summoned as a replacement to fight the undefeated Joshua in front of a packed Garden.

Considered a joke by fans, all Ruiz did was dominate the British champion and use a TKO to turn his life and the heavyweight division upside down. Ruiz racked up 32 wins without beating many boxers of note and walked into the ring with a waistline that will need a supersized championship belt.

Ruiz stepped in after fighting on April 20, when he stopped Alexander Dimitrenko. Jarrell Miller’s failed drug tests sent the challenger to the sideline and paved the way for Ruiz’s unexpected title shot. Ruiz (33-1, 21 KO’s) seized the opportunity and made boxing history.