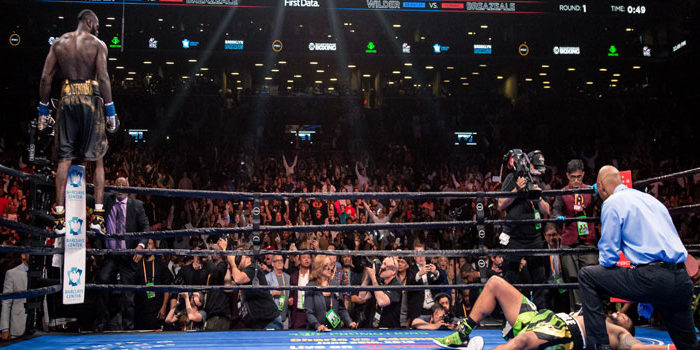 Deontay Wilder faced immense pressure on Saturday night. There was the blowback from his controversial comments earlier in the week. The heated grudge match versus opponent and top contender Dominic Breazeale. And being the first of the three top heavyweights to fight in 2019.

Wilder, once again, proved to be a tough act to follow. The WBC World Heavyweight Champion left no doubt as to who is boxing’s most exciting fighter, flattening Breazeale with a right hand from Hades in the first round of their scheduled 12-rounder at Brooklyn’s Barclays Center.

Breazeale (20-2, 18 KOs), also 33, held a personal grudge against Wilder, stemming from a February 2017 incident in an Alabama hotel lobby, that ended in a melee between the two camps. Both teams pointed the finger at the other for starting a rivalry that didn’t simmer until last night’s result. Wilder had dubbed the bout versus Breazeale “Judgement Day.”

Indeed it was, and the Tuscaloosa, Alabama native meted out justice in swift fashion. Following a grand ring entrance, Wilder went to work in the first.

Breazeale was the aggressor but it was Wilder who struck initially. A long right to the temple caused Breazeale to lose control of his legs. Wilder pounced, driving him to the corner with a series of wild power shots. Breazeale is known for his courage and he demonstrated it during that assault, countering with two overhand rights on Wilder. The second one appeared to land on the back of the head but did its job of backing the champion up.

But only for so long.

Moments later, Wilder stepped in with an explosive one-two, his thunderous right—the most dangerous punch in boxing—catching Breazeale square on the chin. He crumpled to the canvas; Wilder spun away in knowing fashion before the body hit the mat.

Breazeale barely made it to his feet, rising a moment after referee Harvey Dock already reached the count of 10. He tried to plead his case but wobbled backward in the process, clearly in no condition to continue. The official time was 2:17.

IT'S OVER. WILDER KNOCKS OUT BREAZEALE I ROUND 1 pic.twitter.com/bJOAxBP2Hw

“I just told Breazeale I love him and of course I want to see him go home to his family.  I know we say some things, but when you can fight a man and then you can hug him and kiss him, I wish the world was like that.  We shake hands and we live to see another day and that’s what it’s all about.”

As the attention of the heavyweight division turns to what’s next, Wilder insists that a fight with Tyson Fury, the only man he has faced and not defeated, or Anthony Joshua remains on the table and in the works.

In the co-feature, WBC Featherweight World Champion Gary Russell Jr. (30-1, 18 KOs) put on yet another professional display to defend his belt for the fourth time against a valiant Kiko Martinez (39-9-2, 28 KOs). Due to a gash that opened up over Martinez’s left eye, referee Ricky Gonzalez stopped the fight in the fifth round upon the advice of the ringside physician, resulting in a technical knockout.

Russell, who was fighting for the first time in a year, showed no signs of ring rust and displayed his full skillset including his trademark lightning quick hands. The 30-year-old Capitol Heights, Md. native was dominant from the opening bell and landed on a remarkable 40% of his power punches. In an all-action fight with little downtime, Martinez did more than enough to play his part. The Spaniard constantly came forward but Russell continued to target the cut that opened up over his eye after a right hook in the second round. The ringside official called for the stoppage of the fight at 2:52 of round number five.

“I did pretty good,” said the 2008 U.S. Olympian Russell to SHOWTIME ringside reporter Jim Gray. “We stayed behind the jab and he couldn’t get past it.  We knew that intellect over athleticism would get it done.

“We want [WBA Featherweight Champion] Leo Santa Cruz,” Russell continued while wearing a shirt that read ‘Leo Next’. “We want to make this fight happen.  The fire is all the way hot on this side of the field.  You will get burned.  I would love for that fight to happen this year. Let’s make it happen.”

“It was a good stoppage for a very tough fight,” said the former world champion Martinez. “I’m definitely a visual fighter so the cut made it tough. Gary was in great physical condition and it was a very hard fight.

“I’m going to rest a little bit now, but I’ll be back. I thought I had some good moments and had a good division. I think I’ll drop back down to 122-pounds to win a world title there.”

Fighting in front of his mentor Floyd Mayweather, Las Vegas’ Heraldez controlled many of the early rounds by setting the pace and establishing his jab. Heraldez outlanded Mendez 126-108 in total punches and 70-30 in jabs throughout the 10 rounds. Falling behind early, Mendez, a seasoned veteran and 2004 Dominican Republic Olympian, used his experience to grow back into the fight. The tempo picked up in the fifth round, as both fighters landed several heavy blows but the momentum shifted towards Mendez. The 32-year-old Mendez, who has fought seven current or former champions, closed out the fight exceptionally strong, winning the final round on all three judges’ scorecards. Without doing so, Mendez would have lost the fight.

“I thought I won the fight,” said a disappointed Mendez. “He didn’t do anything to me. How did he win the fight? If I have to prove I beat him in a rematch, I’ll be ready. I won’t leave it up to the judges.